Tesla CEO Elon Musk lost $1.1 billion from his net worth yesterday morning (April 4) amid his court showdown with the Securities and Exchange Commission. In the first few minutes of trading, Tesla stock cratered as much as 11% before staging a tepid recovery by day’s end.

This massive spike in trading activity suggests there was a major sell-off amid Musk’s ugly ongoing feud with the SEC over his Twitter usage.

That said, Musk’s net worth still tops $20 billion, so one bad trading day is neither here-for-there for the South African business mogul.

Another factor that is hurting Tesla is the electric-car maker’s record drop in deliveries during the first quarter.

Musk: SEC and I Can Settle Our Differences

All this is obviously bad news for Elon Musk, who has been pummeled by an unending stream of negative press reports and investor backlash, including several shareholder lawsuits.

However, one silver lining to yesterday’s court showdown was that federal judge Alison Nathan did not find that Musk was in contempt of a September 2018 SEC consent order.

In fact, Judge Nathan did not even rule on the motion. Rather, she ordered the SEC and Musk to “take a deep breath, put on your reasonableness pants” and settle their differences out of court. 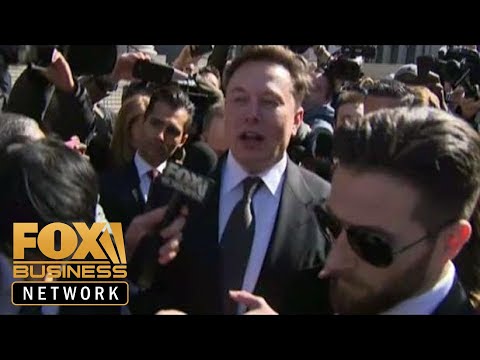 Elon Musk: The Judge Agreed With Me

When Musk left the Manhattan courthouse yesterday, he smiled and praised Judge Nathan (see video below).

Musk also expressed optimism that he and the SEC will sort out their differences over the next two weeks.

The settlement will probably result in Musk paying another huge fine, but won’t lead to his removal as Tesla CEO or from its board of directors.

BREAKING: Judge orders SEC and Elon Musk to confer over next 2 weeks to try to settle issue and doesn't rule on contempt. Elon Musk told CNBC they will "most likely" work it out as he left court.https://t.co/KyFWIUIAI2 pic.twitter.com/VPRQ7eUIfq

Musk later issued a statement, where he suggested that the judge agreed with him that he did not violate the SEC consent order. Under the consent decree, Musk agreed to get approval from Tesla’s board before tweeting anything that could impact TSLA’s stock price.

“I have great respect for Judge Nathan, and I’m pleased with her decision today. The tweet in question was true, immaterial to shareholders, and in no way a violation of my agreement with the SEC.”

“We have always felt that we should be able to work through any disagreements directly with the SEC, rather than prematurely rushing to court.  Today, that is exactly what Judge Nathan instructed.”

Musk: SEC Is Being Unreasonable and Idiotic

Meanwhile, Musk remains defiant in his insistence that the SEC is being unreasonable and overreaching. In a March court filing, Musk torched the agency, saying its contempt filing “is wrong at virtually every level.”

At the time, Musk said he understands that he needs to exercise caution before posting anything on Twitter. However, he says the SEC’s “overbroad interpretation” would restrict his free-speech rights.

Moreover, Musk underscored that his use of Twitter is an important part of Tesla’s marketing and consumer-outreach efforts.

On April 5, Musk was back on Twitter and apparently in a good mood. “Stay positive,” he cooed.