Ellen DeGeneres really looks to be over.

After the 20th season premiere of her once-hit show, the once-infallible talk show host has seen her ratings tumble by as much as 25%.

It seems like DeGeneres can’t escape being ‘canceled,’ and it’s about time.

When news began emerging about the “toxic work environment” that she perpetuated, Ellen DeGeneres initially tried to dismiss it as little more than disgruntled former employees, bloggers with an ax to grind, and “sour grapes” gossip sites trying to “bring her down.”

Ellen is at the end of her rope. She thought this was all just sour grapes from a few haters. But it’s not a passing thing — the hits just keep coming. Ellen’s been in our homes for so long, it’ll take a lot more than a bodyguard and a blogger to change how people feel about her. Her best response is just being happy Ellen on the show every day.

But much like Donald Trump changed the narrative about COVID-19 when he, himself, got affected, so too did Ellen DeGeneres play the victim when she realized the allegations weren’t going away. Not that it worked out in her favor, but give the woman credit for trying, I guess.

In fact, DeGeneres’s ratings are so bad that they’re in the proverbial toilet, according to OK! Magazine.

Even though DeGeneres addressed claims that her talk show set was a “toxic” place to work during the season 18 premiere of The Ellen DeGeneres Show on Monday, September 21, earning her highest ratings in years, things have spiraled downhill since then — with ratings dropping by 25 percent. The 62-year-old’s show doesn’t even rate in the top five TVNewsCheck reports.

So much for “sour grapes.”

The video, below, explains how DeGeneres is actually facing permanent removal from the lineup thanks to these terrible ratings. 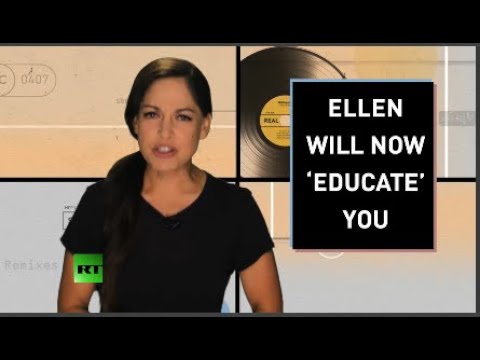 Perhaps it’s petty to rejoice in another person’s misery, but when that person is Ellen DeGeneres — and her work environment sounds nothing short of horrific — you can’t help but think she did deserve at least some of the misery she’s created for herself.

At the very least, you can’t help but wonder when her show will finally go off the air for good.