Dr Disrespect is one of the most popular gaming streamers on Twitch right now and he has now promised never to play PUBG again due to an encounter with a hacker. Hackers have been a huge pain in the neck since the game came out. While Blue Hole has banned thousands of hackers, the problem is still there.

The popular streamer has dissed the game in the past but there has always been a good reason. There was even a time when he deleted the game but he came back to give it another try.

This time it seems that the doc is very serious indeed. Dr Disrespect was trying to get into the holiday cheer and spent a good amount of time in PUBG only to die at the hands of a hacker. The following is what he had to say after reporting the hacker:

I just spent 15 f**king minutes in your sh*thole game to die to a hacker. I spent 20-25 minutes setting up myself for success, rotating in, trying to pick people off coming into the zone, for them to throw a technical foul and lie to me.

The doc was calm at first but viewers know that he can get upset and rage pretty quickly. It was only a matter of time before he got angry and uninstalled the game yet again. He mentioned that the devs do not know what they are doing. The following is what he had to say in this regard:

Just absolute, stubborn clueless developers, get me off the game. I will never play Battlegrounds again, not that one. These Blueball developers over in South Korea, they’ve got no f**king idea, no clue how much time I put in that game.

If you would rather watch and listen to Dr Disrespect raging over the PUBG hacker then you can check out the video below: 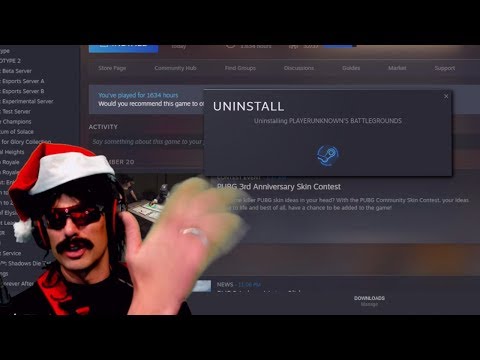 The doc’s frustration is understandable. He has put so many hours into the game just like other players around the world. This is why the pro leagues are being shutdown. The devs simply are not willing to listen to feedback and fix the game. All players get are features that they are not asking for and do not want.