The Dow whipsawed on Tuesday, stringing together its second straight loss as investors braced for a potential escalation in US-China tensions.

Stock market bulls still expect a tariff delay, even though they’ve given up on a pre-deadline trade deal. But Trump’s silence on the matter isn’t doing jittery investors any favors.

Meanwhile, new economic data out of China suggests that Beijing may be strengthening its leverage as it seeks to secure tariff rollbacks.

A spate of gloomy headlines teed up US stocks for more losses. The Dow Jones Industrial Average headlined the retreat, falling 44.59 points or 0.16% to 27,865.01

The gold price rallied, and Goldman Sachs predicts that the yellow metal could surge another 9% to $1,600 by March 2020.

With the Dec. 15 tariff deadline now just five days away, it’s unsurprising that the Dow is reacting violently to seemingly-minute shifts in the unfolding trade war picture.

That primed the Dow for its second straight ugly loss, but the winds in the stock market appeared to shift in response to a report that Washington and Beijing are anticipating a tariff delay. According to the Wall Street Journal, officials on both sides believe talks are moving in a positive direction and that tariff hikes could derail that progress.

Those rumors briefly sent stock market futures into positive territory. However, buried in the Journal’s report is a crucial statement that may have hamstrung the rally:

President Trump…hasn’t yet made his decision, and he has overridden his advisers on trade several times to add tariffs.

But will he do that again? That depends on whether he’s willing to stomach a swift drop in the Dow and other stock indices. 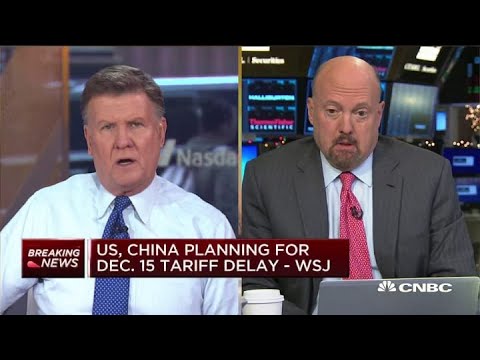 Trump cannot but understand that there are limits and deadlines for any process. Given the growth of equity indices, for which fertile ground has been created by easing policies and lowering interest rates, there is a very large scope for the decline. However, at the moment, stocks are still supported by hopes for the first phase of the trade deal.

Still, Trump and his backers have said that although tariffs may ignite stock market volatility and escalate tensions, they’re a potent tool that gives the US leverage over China.

Slowing Chinese growth supported that thesis, but new economic data out of China suggests that Beijing may be strengthening its footing as it maintains an aggressive stance on tariff rollbacks.

Chinese consumer inflation rose 4.5% year-on-year in November. Most headlines have seized on the fact that this brings Chinese CPI to a seven-year high. But according to Robert Carnell, chief economist and head of research for ING’s Asia-Pacific division, those fearmongering angles “entirely miss the point.”

He explains that China’s pork crisis caused consumer inflation to spiral out of control but that the situation is quickly stabilizing.

Inflation in China has been driven higher by rising pork and consequently other meat prices. This is fallout from the African Swine Fever (AFS) epidemic that has killed half of the hog population in China.

Carnell says that China’s CPI has likely peaked and predicts that inflation will begin to decline along with meat prices.

That could be bad news for the Trump administration, which continues to demand that any trade deal include a commitment from Beijing to import more US agricultural products. After failing to secure those commitments at the height of China’s pork crisis, why should the White House expect to enjoy more success now?

Possibly, the improvement in China’s domestic food situation reduces the incentive to give more ground in trade talks with the US, especially in terms of commitments to buy agricultural produce. Though there may be broader reasons for making concessions to secure tariff rollbacks.