On Wednesday, 11 out of 17 officials at the Federal Reserve reportedly voted to not increase its benchmark interest rate, vowing to remain patient. The Dow Jones immediately responded, surging 163 points within minutes.

According to the WSJ, most Federal Reserve officials foresee the central bank raising the interest rate once in the upcoming three years, a move that could have a sustainable impact on the U.S. market.

With positive fundamental factors in place including an increase in wages and productivity growth, and the noticeable progress in the U.S.-China trade talks, the Dow is projected to rebound following a volatile month.

Art Hogan, National Securities chief market strategist, said in an interview with CNBC that the forecast of the Federal Reserve to not raise its rate throughout 2019 exceeded expectations,

“There was a great deal of potential dovishness priced into the market ahead of this move. But in terms of the best-case scenario for the market, the headlines are giving us that. Expectations were to remove one dot from the dot plot and to have some description of when the balance sheet run-off would conclude. This actually exceeds expectations.”

Despite various optimistic indicators that could revitalize the U.S. economy in the upcoming quarters, Fed Chair Jerome Powell reportedly stated that the Chinese and European economies have slowed “substantially,” suggesting an overall decline in the global economy.

While analysts have generally expected the Federal Reserve to take a wait-and-see approach in its rate this year, because the central bank increased its benchmark interest rate a total of four times in 2018, many analysts expected the Fed to increase the rate at least one or two times in 2019.

Reports suggest that the geopolitical tension between the U.S. and China that is yet to be resolved and the unclear stance of the Fed towards its benchmark rate led investors to be concerned about the instability of the U.S. market.

With the Fed rate no longer a potential variable for investors, a comprehensive trade deal between the U.S. and China, which includes the request of the U.S. to China to protect the intellectual properties of U.S. companies, could stimulate the Dow Jones in the short-term.

On Wednesday, U.S. President Donald Trump stated that tariffs on Chinese products would remain for a “substantial period of time.”

Chinese negotiators are said to favor a swift removal of tariffs once a trade deal is accomplished to relieve its domestic market from most of the pressure generated by the geopolitical risk. 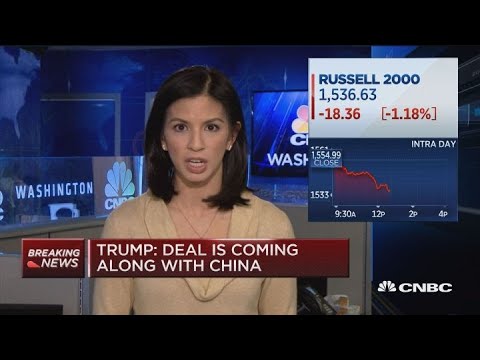 But, with Chinese and U.S. negotiators eyeing a final set of discussions to establish a trade deal by the end of April, the prospect of the trade talks remain more positive than in February.

In recent weeks, reports indicated that overall consumer confidence and spending have been on the rise since January, exceeding the forecasts of Wall Street analysts.

The performance of the Dow Jones and the S&P 500 could most likely depend on the result of the trade talks in the weeks to come, but based on the fundamental indicators that are currently available, the Dow is in an ideal position to regain momentum.