The Dow Jones rallied as Trump signed his phase one trade deal, but the real story for the stock market was his “tax cuts 2.0” tease.

The Dow Jones burst 150 points higher to a new record on Wednesday as Donald Trump and a Chinese delegation put the “phase one” trade deal in writing.

That grabbed the headlines, but what really moved the stock market was a fresh carrot from White House economic adviser Larry Kudlow, who stirred up Dow bulls with his mysterious “tax cuts 2.0” announcement.

The price of gold rose 0.7% to defy the risk-on moves in the stock market, possibly due to fears about another tax cut inflating the U.S. deficit even further above $1 trillion. 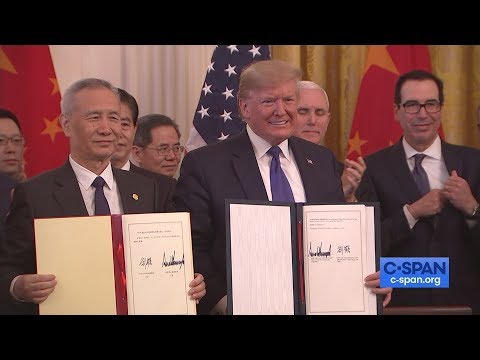 President Trump was clearly in a good mood as he signed the much-vaunted phase one deal in Washington alongside Chinese Vice-Premier Liu He.

Dow bulls have eagerly awaited this moment and will be encouraged by both Liu’s commitment to “work with the U.S.” and Trump’s remark that phase two negotiations will begin immediately.

The biggest news didn’t come from the trade deal, which had already been priced into the stock market. If anything, the trade war weighed on markets due to lingering fears about existing tariffs.

Larry Kudlow Dangles Another Stimulus Carrot for the Dow

Larry Kudlow’s revelation that the White House was working on another round of tax cuts is the real story. 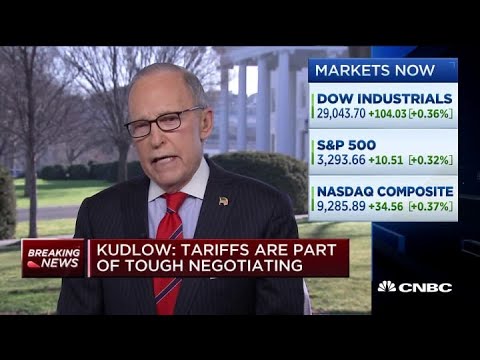 A further reduction in taxes reassures Wall Street that Trump is going to do everything in his power to get the Dow above 30,000 before the 2020 election. It also provides a new positive storyline for the trading algorithms now that the phase one deal is complete.

Stock Market Could Receive Another Rate Cut in 2020

As the trade war falls from the headlines, ABN AMRO’s senior economist, Bill Diviney, notes an interesting consequence of the de-escalation. As tariffs unwind, so too could an already soft inflationary outlook. This might prompt the Federal Reserve to cut interest rates this year.

One little-discussed consequence of the Phase One trade deal with China is that with some of the rollback in tariffs, the upward pressure on core goods that we saw at times in 2018-19 is likely to unwind again in 2020.

Should this occur, the stock market will have to judge the merits of slower growth vs. looser monetary policy, with the latter losing its positive effect if the former is more severe than expected.

Dow Stocks: Boeing Slips, Apple Gets Back On Track

The Dow 30 enjoyed a triple-digit rally, but returns were mixed among the individual stocks.

Goldman Sachs (NYSE: GS) reversed initial losses after its profit missed estimates, but investors appeared to be well priced for the hit from the 1MDB fine, while also enjoying the fact that Goldman sold out of its stake in Uber’s IPO.

UnitedHealth was the best performing company in the Dow Jones, jumping 3.8% after it reported better than expected earnings.

Francois Aure
Financial speculator & author living in the hills in Los Angeles. J.D. but very much not a lawyer. Favorite trading books are anything written by Jack Schwager. | Follow Me On Twitter | Email Me
Subscribe
0 Comments
Inline Feedbacks
View all comments
← PreviousDonald Trump Could Deliver a Knock-Out Punch to the Media This Week
Next →Tesla Flounders in Ford Country as Mustang Mach-E Hype Rages