The Dow Jones zoomed above 27,000 on Monday as global stocks rose in anticipation of an ultra-dovish European Central Bank meeting on Thursday.

Bullish sentiment spread along with easing trade war fears after China lifted tariffs on some US goods in an apparent attempt to unfreeze negotiations.

The Apple product showcase has the iPhone maker’s stock booming, further propping up the Dow despite a sharp drop in oil prices.

China lifted tariffs on many US goods today, providing a crucial risk-positive boost to the Dow. Xi’s administration did opt to maintain agricultural tariffs to keep up political pressure on Trump’s base.

There was also good news for the stock market in the UK, as a Scottish Court ruled the move to shut down Parliament was unlawful. This may further reduce the likelihood of a no-deal Brexit, one of the major tail risks looming for the global economy. The 0.98% bounce in a beleaguered FTSE 100 helped carry a positive mood into the US session. 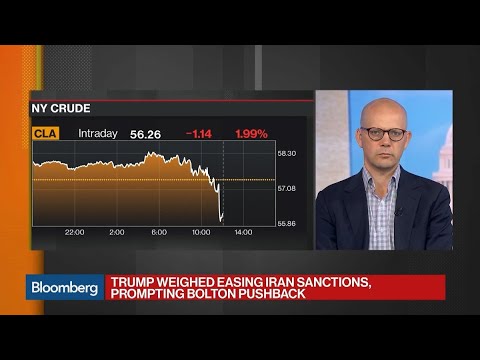 Oil’s steep decline followed a report confirming that John Bolton was fired from his role as National Security Advisor because he pushed back against Trump’s plans to ease sanctions on Iran. This sent oil prices plummeting at the prospect of markets becoming awash with Iranian crude, even as EIA inventories fell 4.3 million barrels more than expected today.

On the other hand, the removal of renowned war-hawk Bolton is a reliable indicator Trump is starting his expected charm offensive to lift the Dow Jones ahead of the 2020 election.

While a brighter mood in Europe would undoubtedly help US indices like the Dow and S&P 500, questions are being raised as to whether Mario Draghi’s stimulus package will work.

Boris Schlossberg, Managing Director at BK Asset Management, believes that there is even a risk of damage to the economy, as he writes in his daily report:

“In the EZ, unlike in US, savers traditionally allocate the vast majority of their funds to fixed income instruments rather than equities. With rates already negative across the region, saving becomes even more difficult, requiring more and more capital, thus dampening demand. More QE, therefore, creates a vicious rather a virtuous cycle with respect to growth and not only becomes ineffective but rather counterproductive.”

Amongst the Dow 30, Chevron and Exxon Mobil were conspicuous laggards amid the drop in energy prices and the worsening longer-term outlook for crude.

Powering the index higher, Apple and Boeing carried the load with gains of 2.64% and 3.43%. AAPL stock is responding positively to yesterday’s product showcase, bucking the typical post-launch trend. Investors are clearly enthused by plans for the new iPhone and the launch of Apple TV.

Boeing’s rally was more surprising given how bad the news has been for one of the Dow’s most heavily weighted stocks. The US’s largest aerospace exporter posted its worst delivery numbers in eight years on Wednesday. Despite this poor data, CEO Dennis Muilenberg’s optimism that the 737 Max would be flying in Q4 of 2019 appeared to deflect negativity from BA stock.