By CCN.com: The Dow exploded toward substantial gains on Thursday, ignoring analyst warnings that President Trump’s latest assault on China threatens to “derail” the trade deal and leave the two economic goliaths locked in an endless trade war.

The stock market sought to extend those gains amid a strengthening labor market.

According to Labor Department statistics published on Thursday, initial jobless claims fell 16,000 to a seasonally adjusted 212,000 for the week ended May 11, down from a four-week moving average of 225,000 a week prior. The figure was moderately better than the 220,000 claims economists had expected.

Analysts believe this strong labor will data bolster the economy, even as trade war-induced volatility tests the mettle of both domestic and foreign stock markets. 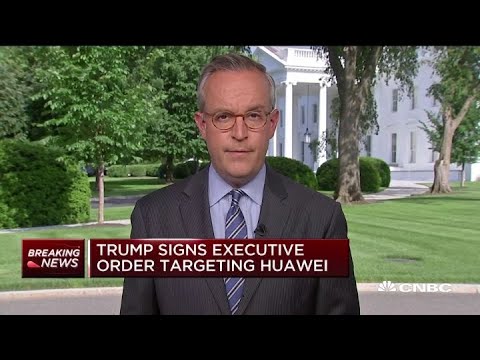 US-China tensions grew even more fraught on May 15 when President Trump declared a national emergency that targets technology companies – specifically Chinese tech giants like Huawei – that the White House alleges present a threat to US national security. The move effectively blacklists Huawei from operating in the US or partnering with US companies.

The Trump administration’s unexpected assault on Huawei sent a chill throughout European stock markets, causing major indices like the DAX and STOXX 600 to sink before rebounding into positive territory later in the session.

Trump’s national emergency order has been described as the “nuclear option,” but it barely registered on Wall Street, where equities trended higher throughout the pre-market session and jumped at the opening bell.

However, international analysts like Scott Kennedy warn that investors should pay very close attention to this saga as it unfolds because – even more than tariff increases and Trump’s Twitter barbs – it threatens to completely “derail” the already dicey US-China trade talks.

“You can’t underestimate the significance. It’s their most important company and threatening it in this way will generate a massive public response as well as from the Chinese government. The bilateral trade talks were on thin ice and this could derail them entirely,” Kennedy, a China expert at the Center for Strategic and International Studies, told Bloomberg.

Most Chinese agree that the US is more powerful than China and Washington holds initiative in the trade war. But we just don't want to cave in and we believe there is no way the US can crush China. We are willing to bear some pain to give the US a lesson.

The May 13 sell-off notwithstanding, Wall Street appears to have more than priced in a successful resolution to the trade war. Such boundless optimism increasingly appears premature.

Presidents Trump and Xi Jinping plan to meet at next month’s G-20 summit in Osaka, purportedly to wrap a bow on a bilateral trade agreement. With each passing day, however, Trump’s long-promised trade deal seems to slip further from his grasp.