The Dow Jones surged as much as 152 points on Friday, only to careen lower following a US dollar spike and a major sell-off in crude oil.

While the Dow had been moving higher for most of the week, Friday brought new evidence of plunging fundamentals as Michigan Consumer Sentiment nosedived.

It was also a terrible day for oil prices, with more than 3% losses in crude as analysts slashed forecasts.

The euro trended sharply lower, pushing the US dollar higher and appearing to spark a sell-off in equities and commodities as it moved below the 1.10 level.

The Euro is dropping against the Dollar “like crazy,” giving them a big export and manufacturing advantage…and the Fed does NOTHING! Our Dollar is now the strongest in history. Sounds good, doesn’t it? Except to those (manufacturers) that make product for sale outside the U.S.

President Donald Trump is not happy about the rising dollar.

Taking the time to tweet an additional assault on the Federal Reserve, he made clear that he believes stock indices like the Dow Jones would be considerably higher if it weren’t for Jerome Powell and the Fed.

If the Fed would cut, we would have one of the biggest Stock Market increases in a long time. Badly run and weak companies are smartly blaming these small Tariffs instead of themselves for bad management…and who can really blame them for doing that? Excuses!

The investment community is not so sure. In a clear rebuke to President Trump, investment bank ABN AMRO released a detailed research piece analyzing the current state of the global economy.

The conclusion by economists Sandra Phlippen and Arjen van Dijkhuizen is that the global slowdown can be almost entirely characterized as a “Trump Slump.” They blame the US administration for the weakness in stocks and the trade war stalemate.

“US negotiation tactics are not effective. The Chinese leadership does not seem to be impressed by the building up of threats and seems to have hardened its approach, reducing the likelihood that a deal will be struck in the near term. At home, the Chinese leadership cannot afford being perceived as being weak and bowing to the US. Moreover, it seems that Beijing has taken the view that it can sit out the trade war by accepting some further economic slowdown (mitigated by yuan depreciation and additional targeted stimulus), with US presidential elections looming.” 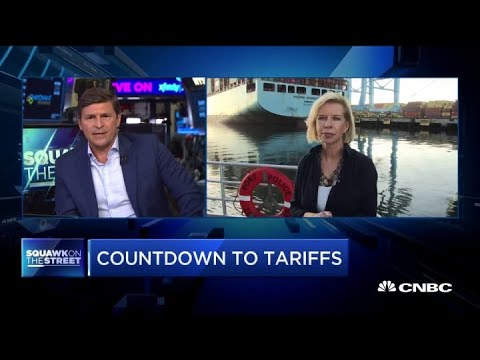 Among Dow 30 stocks, it is clear that a more positive mood on China continues to dominate trading decisions despite fresh tariffs arriving this weekend.

Global growth bellwether Caterpillar posted an impressive 1.1% gain, while chipmaker Intel was also up more than 1.2% on hopes of trade progress.