By CCN.com: On Thursday, White House economic advisor Larry Kudlow made the alarming revelation that the U.S. could extend trade talks with China by weeks or even months, which could intensify geopolitical risks in the global economy and fuel the weakening momentum of the Dow Jones.

Since its opening, within a three-hour span, the Dow has fallen by nearly 100 points from 25,610, struggling to recover beyond the key 26,000 level.

In recent weeks, several analysts have said that the progress in the U.S.-China trade deal is mostly priced into the U.S. market and that minor developments in the trade deal will have virtually no impact on the Dow Jones.

Yet, although positive projection of the trade discussions is priced into the market, potential hurdles or roadblocks are not, and if the trade deal gets delayed by months as suggested by Trump economic adviser Larry Kudlow, it could significantly reduce the interest of retail investors in the U.S. stock market in the near-term.

“This is not time-dependent. This is policy- and enforcement-dependent. If it takes a few more weeks, or if it takes months, so be it. We have to get a great deal, as the president says, that works for the United States. That’s our principal interest,” Kudlow said.

Both the U.S. and China are in a position wherein a comprehensive trade deal would be massively beneficial in many areas. U.S. President Donald Trump is anticipating a presidential campaign in 2020, and a successful trade deal with China would boost the confidence of voters in certain states.

As for China, the decline in its domestic market and the hardship of large-scale industrial companies will likely put significant pressure on Chinese negotiators to achieve a deal as soon as possible.

The core issues in the U.S.-China trade discussions seem to be the reluctance of both sides to compromise on the request of the U.S. to alter China’s industrial policies and China’s request on a swift enforcement process of the deal, removing tariffs in a short time frame.

“We are getting close, but we are not there yet,” said Kudlow.

Throughout March, the prospect of the Federal Reserve not raising its benchmark interest rate is said to have allowed the Dow Jones to remain afloat, maintaining momentum below 26,000.

At the time, strategists indicated that the Federal Reserve might see a factor that could potentially slow down the economy of the U.S. in the medium-term which the rest of the market has failed to recognize.

Affected by the slowdown of the global economy triggered by the declining eurozone market, the rate of the U.S. GDP growth has been revised to 2.2 percent.

The drop in U.S. GDP growth indicates that overall consumer confidence and spending have declined and could continue to drop in the months to come. 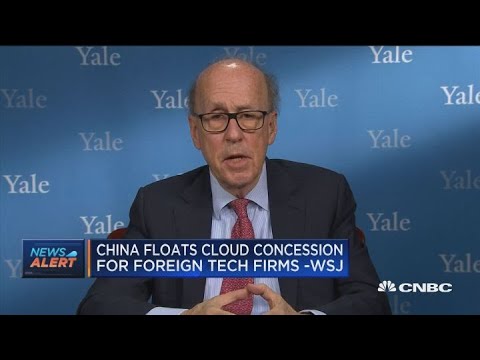 According to Pantheon Macroeconomics chief economist Ian Shepherdson, consumer spending rose slightly in the third quarter of 2018 as a result of the tax cut.

But, Shepherdson emphasized that the tax cut effect was never going to last for an extended period of time.

“The slowdown in GDP growth, from 3.4% in the third quarter, is a straightforward story about the end of the kick from tax cuts, which was never going to last long.”