Since Tuesday’s opening bell, the Dow Jones Industrial Average has dropped by 180.18 points or 0.68 percent to 26,160.84. The index is now down more than 300 points since last Friday. Judging by the IMF’s latest economic forecast, the bleeding might just be getting started.

While various factors including the underwhelming performance of major conglomerates such as Boeing and GE are said to have led the Dow to slip in the past several days, strategists seem to be primarily concerned by fears regarding a global economic slowdown.

On Tuesday, the International Monetary Fund (IMF) reduced the projected growth rate of the global economy in 2019 by 0.2 percent from 3.5 percent to 3.3 percent, citing the presence of geopolitical risks.

“Trade tensions and tariff hikes between the United States and China, a decline in business confidence, a tightening of financial conditions, and higher policy uncertainty across many economies,” the IMF said, according to Bloomberg.

A major catalyst of the slowdown of the global economy is the struggle of the eurozone. Since 2018, leading eurozone economies including France, Germany, and Italy have shown signs of a decline. 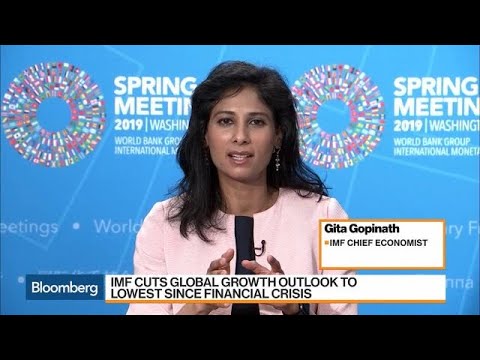 The IMF said that consumer confidence and business sentiment in the eurozone have been on the decline as well.

On April 9, the Trump administration disclosed its plans to impose new tariffs on imports from the European Union in response to the subsidies granted to Airbus.

$11 billion worth of tariffs would place more pressure on the eurozone economy, which could further fuel the slowdown of the global economy.

The World Trade Organization finds that the European Union subsidies to Airbus has adversely impacted the United States, which will now put Tariffs on $11 Billion of EU products! The EU has taken advantage of the U.S. on trade for many years. It will soon stop!

“This case has been in litigation for 14 years, and the time has come for action. Our ultimate goal is to reach an agreement with the EU to end all WTO-inconsistent subsidies to large civil aircraft. When the EU ends these harmful subsidies, the additional U.S. duties imposed in response can be lifted.”

With potential tariffs on EU products, the IMF’s dismal economic forecast, and the existing geopolitical risks arising from the lack of a comprehensive deal between the U.S. and China, strategists remain cautious on the outlook of the U.S. equities market and the Dow Jones.

The permabull trollers may have missed this, but the IMF just took another hatchet to its 2019 global growth forecast, down to the slowest pace for the cycle. In just two words, the Fund politely concluded that we have reached a "delicate moment"

Previously, Wells Fargo Investment Institute head of global asset allocation strategy Tracie McMillion said that the bank does not see a significant development in earnings to substantially boost the equities market in the near-term.

“We’re not anticipating that we’re going to see a big enough earnings surprise to boost stock prices much higher than they are now,” McMillion said.

Would a Trade Deal Avert an Economic Crisis?

The Dow Jones is still near its all-time high, and many stocks remain expensive for retail investors. A significant stimulus would be needed to push the Dow far beyond the 26,000-point mark, and strategists are uncertain whether such stimuli exist in the foreseeable future.

Considering that the IMF finds the trade tension between the U.S. and China as a major factor fueling the slowdown, a full trade deal would alleviate most of the pressure on the global market.

If a deal is to be made in the upcoming months, with the Federal Reserve not exploring a rate hike until the year’s end, it may lay a foundation for a strong recovery down the line.

If not, the Dow and broader stock market could face a major crisis.