The Dow bounced back from its Halloween haunting on Friday after a stunning jobs report distracted from foreboding economic data.

Dow Snaps Toward a Recovery After Strong Non-Farm Payrolls Data

The gold price declined by 0.17% as equities spiked. The yellow metal had basked in Thursday’s risk-off climate, which allowed it to reclaim the psychologically-significant $1,500 level.

A surprisingly-strong jobs report emboldened Dow bulls, who had already prepared to shrug off any dismal statistics as outliers caused by the prolonged General Motors strike.

However, those excuses turned out not to be necessary, because nonfarm payrolls jumped by 128,000 anyway, easily smashing the Dow Jones economist estimate of 75,000. 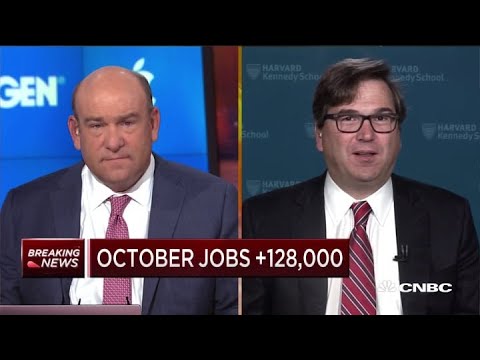 In isolation, Friday’s jobs report would be expected to fortify economic forecasts against recession warnings. However, the manufacturing sector is already in a recession, and the apparent breakdown in trade war optimism suggests that the gloomy picture won’t change anytime soon.

This morning, the ISM Manufacturing PMI report revealed that factory activity had contracted for a third straight month. PMI came in at 48.3, slightly below the 49.0 economists had expected. Readings below 50 indicate contraction.

“Customer demand is down, and we are expecting a very soft fourth quarter, without much relief in sight for Q1. Suppliers report the continued rise in labor costs, which are ultimately reflected in the rising product costs.”

The poor data weren’t entirely surprising. On Thursday, Chicago PMI – a key measure of regional business sentiment – plunged to a nearly four year low of 43.2, missing economist estimates by a wide margin. Chicago PMI is more volatile than the broader ISM Manufacturing report, but it’s difficult to disregard a print of 43.2.

Chicago PMI comes in at 43.2 and the business sector is in recession but the Fed keeps talking about the economy and the state of monetary policy as being in "a good place". Surely this is some sort of dark comedy routine.

To be sure, manufacturing comprises a much leaner slice of the US economy than in the sector’s glory days. A recent Bloomberg report found that, contrary to President Trump’s promise to make American manufacturing great again, US factory output’s contribution to GDP floundered at 11% in the second quarter– its lowest point in 72 years.

Notably, today’s non-farms payrolls report revealed that the manufacturing sector had lost 36,000 jobs, though that figure was intensified by the GM strike.

Ironically, the industry’s decline is a silver lining for the economy’s overall picture, given that PMI printed readings below 50 in each of the past three months – underperforming economist forecasts on all three occasions.