The Dow Jones Industrial Average soared nearly 400 points Tuesday, closing 372 points (1.48%) higher on news of a bipartisan agreement between Republicans and Democrats on Capitol Hill to fund the U.S. government and prevent a second shutdown.

Another government shutdown could potentially be an even more devastating replay of the last, which set a record as the longest federal shutdown in U.S. history. That saga represented a massive economic dislocation for federal workers, government contractors, and the downstream ripple effects their one-month-long furlough had on other businesses.

The CBO has warned a second shutdown would be far worse than the first in the scale of economic losses to American business that would ensue. Markets abhor uncertainty, and the chaotic, unpredictable environment of Washington politics has had the stock market jittery about how equities will do over the rest of Donald Trump’s term as president.

The spending agreement will also secure funding for the U.S. border police state, but Democrats and Republicans spent the day in a messaging war over what’s in the bill and what’s not, each hoping to come away from the deal with the perception of gaining the most concessions for their side of the all mighty partisan divide.

Donald Trump seems to be taking the opposite approach and preempting any criticism from his base of single-issue border and immigration voters by expressing how unhappy with the agreement he is but saying he’s likely to settle for it and avoid a second government shutdown. 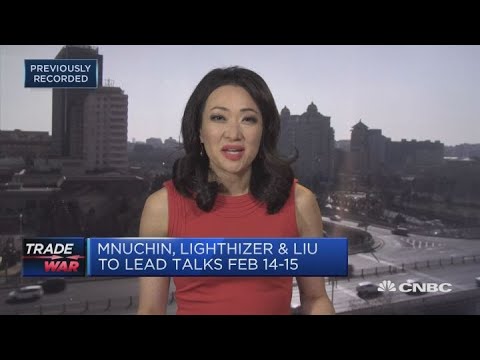 Here’s one of those examples where markets can get too excitable for better or worse over rumor, speculation, and innuendo. Today, Fred Imbert reports at CNBC that the Dow jumped on U.S.-China trade hopes:

“Investors also focused on U.S.-China trade talks as both countries try to hammer out a deal before an early March deadline. Both sides expressed hopes the new round of negotiations, which began in Beijing on Monday, would bring them closer to a comprehensive trade agreement.”

But the stock market didn’t learn anything new today since falling yesterday over fears about the U.S.-China trade negotiations. Writing for the same news source Monday, the same journalist reported the Dow slipped over doubts that U.S. and Chinese negotiators would fend off an impending escalation of Donald Trump’s trade war:

“‘The market is now waiting for information on the trade and geopolitical issues that still exist,’ said Brent Schutte, chief investment strategist for Northwestern Mutual Wealth Management. ‘With those coming so close in the next few months, I don’t think the market is going to get too far out over its skis in either direction.'”

“‘We’re almost at a waiting point trying to assess whether what is the likelihood of a trade deal,’ Schutte said.”

Well, it sure didn’t take wrong for that assessment not to age well. And that information the market was waiting for yesterday never came today. All that happened was negotiators sat down for the meeting that investors already knew they would be sitting down for before today. Did the stock market really trade higher because a pre-arranged meeting happened as planned? If that’s the case, the key term in Imbert’s Tuesday headline is “trade hopes.”

I just hope no one’s retirement fund manager is telling them that part of their hedge fund’s trading strategy is that sometimes investors just have “hopes.” We’re really not in any place very different from the dead cat flop we were facing last week when stocks had three losing days in a row over the looming deadline for a U.S.-Chinese settlement.