Stop me if you’ve heard this one before: Donald Trump lashes out on Twitter to savage another government’s trade regime, and the Dow Jones Industrial Average drops by triple digits.

No, the president didn’t lob another volley of insults at China as the two sides seemingly near a historic trade deal, but Trump may have just dropped the teaser trailer for the sequel – and Wall Street didn’t like what it saw.

The Dow’s worst performers were Caterpillar, which dropped 2.48 percent, and Dow Inc., which fell 1.54 percent. Walt Disney Co. mitigated the bleeding with a 1.65 percent gain, but it wasn’t enough to pull the index into the green. 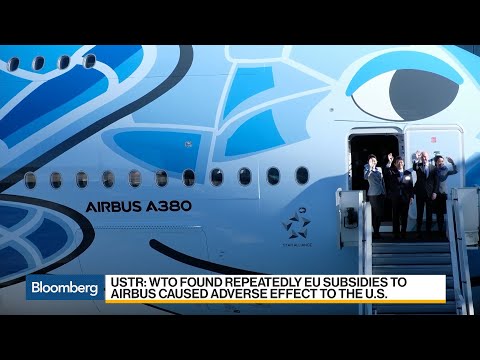 Writing on Twitter, Trump savaged the EU for allegedly taking advantage of the US. “It will soon stop,” he seethed, previewing that the US will slap tariffs on $11 billion worth of European goods.

“The World Trade Organization finds that the European Union subsidies to Airbus has adversely impacted the United States, which will now put Tariffs on $11 Billion of EU products! The EU has taken advantage of the U.S. on trade for many years. It will soon stop!”

The World Trade Organization finds that the European Union subsidies to Airbus has adversely impacted the United States, which will now put Tariffs on $11 Billion of EU products! The EU has taken advantage of the U.S. on trade for many years. It will soon stop!

Trump’s threat further escalated already-heightened tensions between the US and EU. It risks causing a decade-old dispute to spiral into a full-scale trade war.

The Trump administration cast the first stone on Monday by unveiling $11 billion worth of new tariffs on EU imports. According to the Office of the US Trade Representative (USTR), those tariffs will punish the EU for illegally subsidizing aerospace giant Airbus.

Airbus, of course, is the chief competitor of US aerospace titan Boeing, whose shares continue to crater under the pressure of a continuous volley of negative press related to its controversial 737 MAX aircraft line.

Is Trump Trying to Bolster Boeing to Increase Reelection Chances?

Trump, as CCN.com reported, plans to center his reelection campaign around the stock market’s performance during his presidency and will reportedly spare no effort in fueling the market’s recovery from its late December 2018 lows.

It’s clear that this strategy requires proactive action to help Boeing regain its footing, as the $210 billion company retains a 9.64 percent weighting in the Dow and thus holds considerable sway over the index’s movements. On Monday, for instance, Boeing stock crashed by 4.44 percent, dragging the Dow into the red even as the S&P 500 and Nasdaq consolidated minor increases.

However, Trump’s strategy could have the unintended consequence of trapping Boeing in the crosswinds if the aerospace subsidy spat snowballs into an intercontinental trade war. Already, the EU has previewed retaliatory tariffs against the US for allegedly providing Boeing with illegal subsidies.

The already-battered stock faces further headwinds on the news that it received no new 737 MAX orders in March and saw its first-quarter deliveries dive by 37 percent to 149.

Meanwhile, the clock continues to tick on the seemingly never-ending US-China trade war, which – despite a steady diet of positive news designed to juice the Dow – has yet to see Presidents Trump and Xi put pen to paper on a bilateral trade agreement.