The Dow Jones plunged more than 275 points on Tuesday, rocked by a dramatic escalation in trade war risks between the US and China.

Donald Trump’s “tariff man” persona is back, and Dow bulls are being forced to dramatically reassess their outlook for overbought stock markets trading close to record highs.

Of the three most important Wall Street indices, the Dow was the worst performer, outpacing the roughly 0.6% dip in both the Nasdaq and the S&P 500.

Unsurprisingly, the price of gold was surging amid the stock market angst, rising 1%. Crude oil was up 0.54% as it continued to trend higher despite the risks to global growth.

Additional headwinds for the Dow were generated by another weak performance in European stocks. The FTSE 100 plunged 1.75% after a struggling dollar helped send the British pound (GBP/USD) above 1.3000.

Elsewhere, the French CAC 40 lost 1%, while the German DAX was able to sneak into the green.

Donald Trump shocked the stock market today with comments that it might be better to wait until after the 2020 election to make a deal with China.

His remarks sent the Dow Jones sharply lower, and they come amid a surprising return of Trump’s “tariff man” alter ego.

Investors fear the “tariff man” because he appears to disregard the performance of US stocks and prefers to focus on pleasing his voter base with protectionist tactics.

If the US president had only made his China remark, this would probably have still surprised an increasingly complacent Dow. Unfortunately for stock bulls, Trump is doubling down on tariffs worldwide. Argentina, Brazil, and France are all feeling the threat of new import taxes on their goods.

10 Reasons Why the Dow Crashed 450 Points on Tuesday https://t.co/jBLIDyRAXA

The decision to go after French luxury imports is particularly worrying, as it raises the specter of Trump eventually opting to start a full-blown trade war with the EU (as the president has often hinted he might). A tense NATO meeting with French President Emmanuel Macron probably didn’t help this situation as Trump retaliates against France’s new digital tax on US tech companies.

All of this comes at a time when the Dow Jones was priced for a swift phase one resolution with China. The White House has played the role of a pied piper, repeatedly reassuring Dow bulls to keep the faith and helping lift it to record highs. For now, this steady lifeline of “progress in trade talks” appears to have been cut off.

Despite the avalanche of negative trade headlines on Tuesday, there are still plenty of optimists to be found.

Chief economist Han de Jong at ABN AMRO is still maintaining a positive outlook for 2020. But he provides a dire warning for the Dow if Trump and Xi opt for escalation next year:

On balance, we look ahead to 2020 with some optimism. The global economy has weakened significantly in the past two years. But there is reason to assume that 2020 will bring an acceleration in global growth. One crucial factor is the (temporary) termination of the conflict between China and the US. If that conflict is allowed to drag on or escalate further, the global economy will suffer badly in 2020. We assume that the antagonists will reach an agreement some time soon, even if an agreement is torn up again after the US elections.

Merck (+0.36%) was the only member of the Dow 30 consistently up throughout the day as the index swooned with the geopolitical headlines.

One of the worst-hit stocks in the Dow Jones was financial giant Goldman Sachs, which sold off more than 2.25% as bond prices surged and treasury yields collapsed. 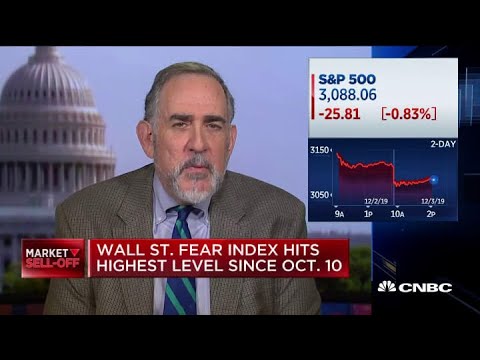 Dow heavyweights Boeing (BA) and Apple (AAPL) were under heavy pressure for the second straight day.

AAPL stock shed an alarming 1.91% as fears mount that it will have to endure December’s tariffs after all. This would be the first time that Apple’s bottom line could take a substantial hit from the trade war.

Boeing is the most crucial stock in the Dow 30 due to its heavy weighting, and BA slid over 0.75%. Boeing is caught between its exposure to China and a steady flow of concerning headlines surrounding the 737 MAX’s return to commercial usage.