The Dow Jones had its upward momentum sharply arrested after a bombshell news leak alleged that President Donald Trump was considering limiting US portfolio inflows to China and booting Chinese firms from US stock exchanges.

This “nuclear option” disturbed a stock market that had been enjoying a better than expected Michigan consumer sentiment release and called the president’s Dow-friendly bona fides into question once again.

The stock market’s decline accelerated in late afternoon trading, putting the Dow Jones Industrial Average at risk of falling for the second straight week. As of 2:59 pm ET, the Dow had declined by 159.75 points or 0.59% to 26,731.37.

USD/CNH (the offshore Chinese yuan), which is often used as a trade war barometer, spiked sharply higher after the China portfolio news broke. Pressing further above 7.1, the currency pair’s inverse correlation with US stocks continued, as the Dow Jones, S&P 500, and Nasdaq all sold off-sharply.

The news about the White House deliberations crushed US-listed Chinese stocks like Alibaba Group and Baidu, which would see the largest blowback.

Despite the immediate weakness in the Dow, restricting portfolio flows from the US into China remains a nuclear option that would inject an avalanche of volatility into index funds with any exposure to China.

Markets are clearly not assigning a high probability that this will happen (yet) — instead, some analysts theorize it is merely a tactic to distract people from the ongoing impeachment saga.

As the noose tightens, there will progressively more frequent and erratic lashing out to re-direct the narrative, with no regard to anything but himself.

Even die hard Trumpers know deep down this is true. https://t.co/qKYfsSib4g

Brexit gloom in the UK was no help to the Dow after the Bank of England’s Michael Saunders raised concerns over the direction of the British economy.

Michigan consumer sentiment data beat expectations, defying the deluge of market negativity. This reading suggests that US households are still resilient to recession talk, as the index rose with stocks this month after a choppy August.

ING: Biden May Be Better for Stock Market Than Trump

While there is a consensus that the election of a populist Democrat would be a negative for the US stock market, Donald Trump’s reelection remains a controversial issue.

Trump started his term in office with deregulation and tax cuts, but he quickly resorted to market-crippling tariffs to protect US industry. The imposition of protectionism is often referenced as one of the reasons why the Dow Jones has moved sideways for most of the Trump presidency.

In a comprehensive piece of economic and political analysis, ING Chief Economists James Knightley and Mark Cliffe poured cold water on any hungry bulls hoping for another post-election “Trump bump” in 2020.

“President Trump may find that his domestic legislative agenda is curtailed by opposition lawmakers if Democrats retain control of the House. This could see him re-focus his attention back to trade where he has more leeway. In an environment of ongoing weak global growth, renewed tensions could see market and economic sentiment come under downward pressure once again, exacerbating the risks for the US economy.”

Curiously, ING’s report says a centrist Democrat (such as Joe Biden) might be a positive for markets. Cliffe and Knightley argue this to be the case, even if such an outcome stemmed from a period of economic instability heading into the election.

“Conversely, while the centrist Democrat scenario stems from economic weakness, tax cuts and increases in infrastructure spending could be pushed through (if Democrats retain control of the House), which could provide a boost to growth in 2012/2022. Moreover, better relations with trade partners or a more conciliatory tone towards Europe with the aim of extracting concessions from China could be helpful.” 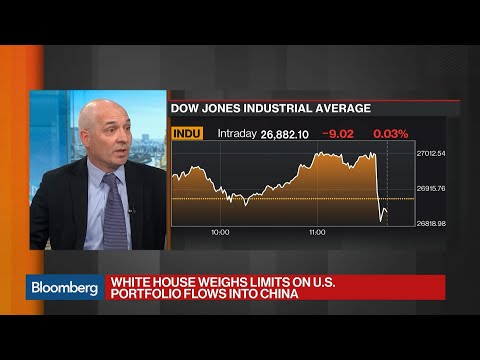 The prospect of escalating tensions between China and the United States was a significant negative among some of the biggest names in the Dow 30.

Apple (-1.03%) and Microsoft (-1.76%) dropped immediately after the news, while Boeing’s Chinese order book dragged the aerospace manufacturer deeper into the red (-1.34%), alongside upcoming testimony from CEO Dennis Muilenberg.

Pfizer stock was another top performer, up almost 1% alongside news that the firm’s current CEO would stay on as chairman.