President Donald Trump took to Twitter once more to rail against what he described as “horror show” trade deals inked by previous White House administrations and make the case that tariffs are good for the United States. What does this mean for the Dow Jones heading into next week?

Countries are coming to us wanting to negotiate REAL trade deals, not the one sided horror show deals made by past administrations. They don’t want to be targeted for Tariffs by the U.S.

One need only look to last week to find the answer: The Dow showed us clearly what the ramifications of further escalation with China are.

A huge 690-point swing exploded after Trump announced an additional 10% tariff. The losses at one point totaled nearly 1,000 points before dip-buying came into play.

Not everyone is convinced that Trump is as concerned with US trade with China as he appears. In an interesting report from Andreas Steno Larsen and Martin Enlund for Nordea, the two economists make the point that this whole strategy is about handcuffing the Federal Reserve into more easing.

“Despite a cut and an early end to QT, the Fed is still some way from really pleasing the Donald. Escalating tariffs may be his only “option” if he wants the Fed to cave in to his dovish wishes, why we are not utterly surprised by the post-FOMC timing of Trumps tariff-tweet. Trump probably knows that an escalation of the tariff-war is the easiest way to force the Fed into deep cuts.”

Things are going along very well with China. They are paying us Tens of Billions of Dollars, made possible by their monetary devaluations and pumping in massive amounts of cash to keep their system going. So far our consumer is paying nothing – and no inflation. No help from Fed!

Pressuring Powell could be a fruitless endeavor for the president, who is banking on Fed easing weakening the dollar and boosting stocks.

Easing expectations increased after his tariff announcement during the week but hurt the US stock market anyway.

Fears that Trump could extend his tariffs and rhetoric to an even larger economic area, the European Union, have also refused to go away. 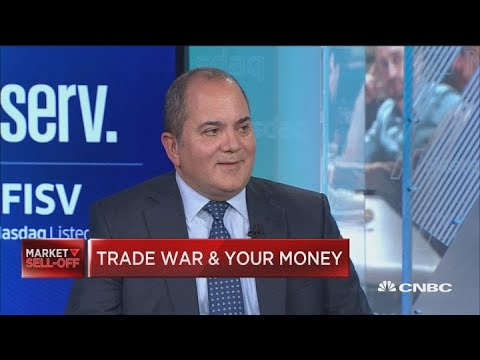 Moreover, Trump’s claims regarding the benefits of tariffs to the US taxpayer have been brought sharply into question.

When it comes to the Dow Jones, investors are only concerned with trying to see the economic reality. Merely watching the earnings of a Dow staple like Caterpillar or Boeing recently has been enough to tell you that things are looking less rosy for the index.

Perhaps the Dow Jones’ highest-profile stock, Apple, may face the greatest impact from Trump’s latest round of goods on household items. A 10% levy is coming into effect on the watches, phones, desktops, and phones that Apple sells. The US tech giant has been very vocal about the dangers of tariffs to its business. As the largest market cap stock in the Dow, AAPL, surely poses the most significant risk to the Dow’s performance in the coming week as Trump escalates the trade war again.