By CCN.com: The Dow suffered whiplash on Tuesday after Donald Trump’s shocking China flip-flop spooked the markets and distracted investors from the president’s otherwise successful four-day visit to Japan.

Meanwhile, one stock market analyst says that he has had enough of Trump’s “Game of Thrones” presidency and its utterly “disappointing” results.

All of Wall Street’s major indices recovered from muted pre-market sessions to mount impressive rallies on Tuesday – only to swing lower soon after.

Stocks remained volatile after President Trump deviated from his self-imposed party line, admitting that the US is “not ready” to strike a new trade deal with China.

“I think they probably wish they made the deal that they had on the table before they tried to renegotiate it,” Trump said Monday at a joint press conference in Tokyo alongside Japanese leader Shinzo Abe. “They would like to make a deal. We’re not ready to make a deal.”

The cherry on top? Trump warned that the US would consider raising tariffs on Chinese goods “substantially” to twist Beijing’s hand further.

“I think sometime in the future China and the United States will absolutely have a great trade deal, and we look forward to that,” Trump said. “Because I don’t believe that China can continue to pay these, really, hundreds of billions of dollars in tariffs. I don’t believe they can do that.”

That’s a stark reversal from May 24 – last Friday – when Trump boasted to White House reporters that he would resolve the trade standoff unbelievably quickly.

Analyst Rails at Trump & His ‘Game of Thrones’ Strategy 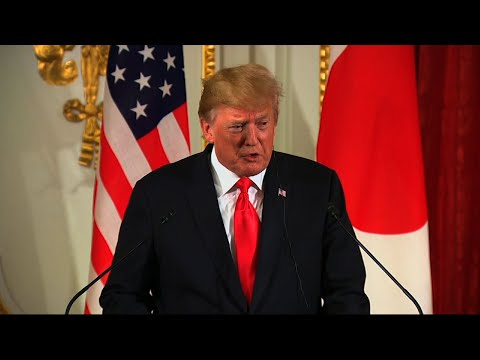 It’s unclear what – if anything – changed over the holiday weekend, but Trump’s sudden tonal shift injected more volatility into an already-fragile stock market.

One analyst savaged the former television star for treating his presidency like an episode of “Game of Thrones.”

“Trump is playing a Game of Thrones with both foreign and domestic adversaries,” said Ed Yardeni, president and chief investment strategist at Yardeni Research, according to CNBC. “Since he is the President of the world’s greatest economic and military power, he claimed that he will consummate lots of deals with them that will greatly benefit the US in short order. The results have been mostly disappointing so far.”

Trump’s shocking China reversal offset Wall Street optimism about his trip to Japan, which by all accounts, helped smooth tensions between the two allies.

Analysts had feared that Trump would open another front in his international trade crusade by targeting the US-Japan trade imbalance, but the president appeared eager to resolve standing disagreements and confident in a swift resolution to the dispute.

Consequently, the Dow looks unlikely to mount an end-of-month comeback and extend its four-month winning streak.

The US stock market remained closed on Monday in observance of the Memorial Day holiday.