The Dow prepared to zoom higher for a second consecutive day after Federal Reserve Chair Jerome Powell all-but-confirmed that at least one interest rate cut waits just over the horizon.

However, with the US stock market trading racing toward new record highs, investors must now grapple with yet another front in President Trump’s international trade war.

All of Wall Street’s major indices readied themselves to advance at the opening bell. Futures tracking the Dow Jones Industrial Average rallied 95 points or 0.35%, implying a gain of 101.8 points.

S&P 500 futures climbed 0.2%, suggesting that the large-cap index will trade above 3,000 when the markets open.

Nasdaq futures rose 0.21% to round out a positive pre-market session.

Stocks pounded higher even after France decided to call the Trump administration’s bluff and slap a punitive “digital tax” on the revenues of gigantic tech firms, most of which are headquartered in the US.

The 3% tax will target companies with at least $845 million in revenue and $28 million in French revenue. It’s primarily aimed at FAANG staples like Amazon, Google, and Facebook.

“France is sovereign, and France decides its own tax rules. And this will continue to be the case,” France’s Finance Minister Bruno Le Maire said in a statement. 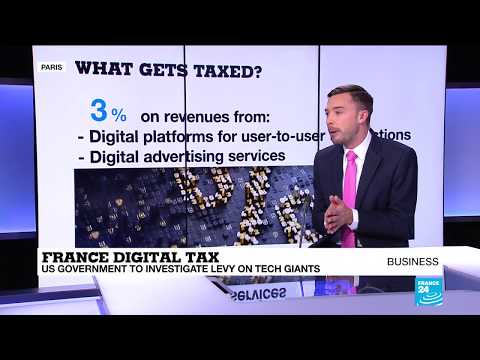 The French and Trumpian War

The White House had warned France that it could face repercussions if it proceeded with its controversial digital tax, which Le Maire predicts could net more than half-a-billion dollars in annual revenue.

If the Trump administration follows through on that threat, the US could find itself mired in yet another trade war, this time with its oldest ally.

Trump preps for a trade war with France >> pic.twitter.com/vyC2m3JTBB

The Office of the US Trade Representative quickly announced an investigation into France’s digital tax, alleging that “France is unfairly targeting the tax at certain US-based technology companies.”

“The United States is very concerned that the digital services tax which is expected to pass the French Senate tomorrow unfairly targets American companies,” said US Trade Representative Robert Lighthizer in a statement. “The President has directed that we investigate the effects of this legislation and determine whether it is discriminatory or unreasonable and burdens or restricts United States commerce.”

According to Census Bureau data, the US imported around $52.4 billion worth of French goods in 2018, compared to $36.6 billion in exports.

For now, though, the Dow continues to trade higher amid Federal Reserve Chair Jerome Powell’s Capitol Hill testimony. His dovish commentary has made Wall Street confident that the central bank will reduce its target interest rate to stimulate continued economic expansion.

CME’s FedWatch Tool indicates a 100% probability that the Fed will cut rates at its end-of-July meeting. The market believes there’s a 29% chance that this will be a 50 basis point cut to 175-200 from the current target of 225-250.