A wild week for the U.S. stock market looks set to end in appropriately volatile fashion on Friday, as the sudden reemergence in U.S.-China tensions adds another threat to the Dow Jones Industrial Average’s growing arsenal of downside risks.

U.S. President Donald Trump’s refusal to renegotiate the “phase one” trade deal – or even speak to Xi Jinping – appears to be more than just an idle threat.

The Commerce Department is going to war with Chinese telecom giant Huawei as the industry prepares to make the leap to 5G. And now the Dow Jones finds itself caught in the crossfire as the U.S. and China duke it out in the press.

After falling more than 1,000 points during an excruciating three-day sell-off, the Dow appeared to flip the script on Thursday.

An initial 458 point plunge sent the index below the crucial 23,000 support threshold, before a wild 836-point swing launched the DJIA to a session gain of 377 points.

Dow futures extended those gains in the overnight session, before a bombshell development knocked bulls back on their heels.

The weakness carried over into regular trading hours.

Trump and China have ratcheted up the rhetoric as the world plays the coronavirus blame game, but it’s becoming increasingly clear that this won’t be just another war of words.

A stock market that was rocked by back-and-forth trade war headlines for more than a year is about to get some nauseating deja vu.

On Friday, the Commerce Department abruptly announced that it was taking targeted actions to severe Huawei’s access to U.S. semiconductor technology.

Once the rules go into effect, foreign foundries that use U.S. semiconductor manufacturing equipment must obtain a U.S. license before they can supply restricted chips to Huawei or its affiliates.

Huawei has been on a U.S. government blacklist since May 2019, but temporary exemptions have allowed some U.S. businesses to continue conducting business with the Chinese firm.

One of those licenses was extended on Friday, though the government claims it will expire for good on August 13. 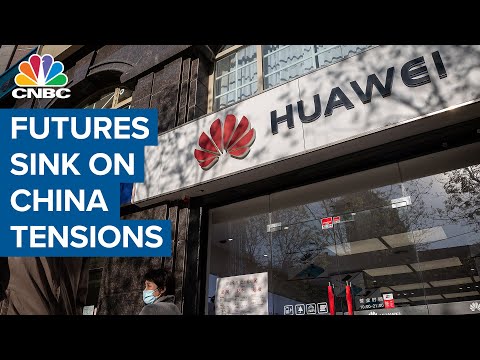 Alongside these exemptions, the Commerce Department says that Huawei – the world’s second-largest smartphone manufacturer – had concocted other ways to evade the blacklist’s export controls.

The Bureau of Industry and Security (BIS) says it’s had enough:

BIS is amending its longstanding foreign-produced direct product rule and the Entity List to narrowly and strategically target Huawei’s acquisition of semiconductors that are the direct product of certain U.S. software and technology.

Beijing has not formally addressed the enhanced attempt to blockade Huawei’s access to U.S. technology, but that hasn’t stopped the Chinese government from making its position abundantly clear.

Global Times editor Hu Xijin issued a stark warning on Twitter, stating that his information indicates that China will retaliate by targeting U.S. tech companies or turning the screws on an already-battered U.S. aerospace industry.

He wrote this morning:

Based on what I know, if the US further blocks key technology supply to Huawei, China will activate the “unreliable entity list”, restrict or investigate US companies such as Qualcomm, Cisco and Apple, and suspend the purchase of Boeing airplanes.

The Global Times is effectively run by the Chinese Communist Party (CCP), and it operates under the party’s “official” mouthpiece, the People’s Daily.

It was no accident that three of the companies Hu’s tweet listed by name – Apple, Boeing, and Cisco – are members of the Dow Jones Industrial Average (DJIA).

All three of them struggled in pre-market trading. At last check, Apple and Boeing were down more than 2%, while Cisco had crawled to a slight 0.2% gain.