The Dow Jones is getting pummeled again, down 721 points (2.72%) as a significant global move from risk comes on the back of a fresh escalation in Trump’s trade war with China.

Beijing has mounted its most vigorous response yet, weaponizing the yuan and making an official point to avoid US agricultural exports.

Wherever you look, the world’s major economies have significant issues.

The Stoxx Europe 600 is heading towards its worst 2-day loss in a decade while the FTSE 100 and CAC 40 closed down more than 2%.

Emerging markets were among the worst hit by the turmoil as several bond yields hit record lows. In domestic sympathy with the Dow, every single sector in the S&P 500 also dove into the red.

China is intent on continuing to receive the hundreds of Billions of Dollars they have been taking from the U.S. with unfair trade practices and currency manipulation. So one-sided, it should have been stopped many years ago!

In an attempt to explain why the formerly market-friendly President Trump continues to pursue trade war escalation with such enthusiasm, AFEX Market Watch provided the following theory: Trump wants to force the Fed into more aggressive easing.

“President Trump wants the Fed to keep lowering interest rates to power the US economy forward. Every time they do not do what he wants, he disrupts the trade talks with China and causes markets to sell off, and the economy to slow down a little. Meaning more pressure comes to bear on the Fed for lower interest rates. Eventually, with lower interest rates and higher equity markets, he will agree a trade deal with China in time for his re-election in 2020. Let’s see if that is his plan.”

Following this line of reasoning, it is in Trump’s interest for the Dow to shed some of its valuation. A dip would make the index’s path to the upside more straightforward in 2020.

Regardless of the president’s intentions, markets are rapidly readjusting their expectations for interest rates. Rate markets are now pricing a possible 50-basis point cut by the Federal Reserve before the end of the year. 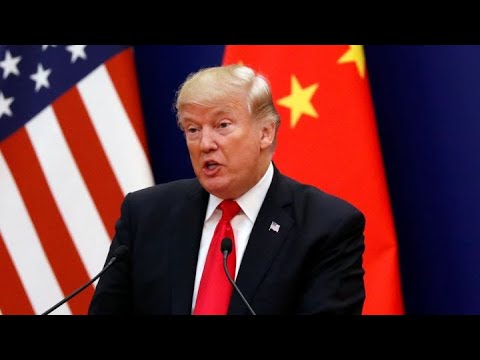 Every single stock in the Dow Jones Industrial Average is trading lower on the day except for Verizon. Among these companies, Apple (APPL) was unsurprisingly one of the worst-hit, down 4%. The latest round of tariffs will hit their core business, and their massive market cap could well be a sizeable burden on the Dow Jones if this period of risk-off continues.

Visa, IBM, Goldman Sachs, and Intel are all down more than 3% amid a period of heavy selling that began last week and appears to be accelerating.

When you glance over at the Nasdaq, which plunged more than 3.15%, it is apparent that trouble with China means trouble for US tech. Chipmaker Nvidia perfectly encapsulated this with a 6.3% loss, as the chip sector is taking a pummeling.

The Dow Jones might be diversified, but with export stars like Caterpillar and Boeing likely Bejing retaliation targets, there is too much exposure to China to avoid this truly global flight to safety.