Stocks took a beating in the pre-market session, almost heading towards ‘limit-down’ levels again. An eerie throwback to the March selloff?
PHNjcmlwdCBhc3luYyBzcmM9Imh0dHBzOi8vcGFnZWFkMi5nb29nbGVzeW5kaWNhdGlvbi5jb20vcGFnZWFkL2pzL2Fkc2J5Z29vZ2xlLmpzIj48L3NjcmlwdD4KPCEtLSBUb3AgQXJ0aWNsZSBDQ04gLS0+CjxpbnMgY2xhc3M9ImFkc2J5Z29vZ2xlIgogICAgIHN0eWxlPSJkaXNwbGF5OmJsb2NrIgogICAgIGRhdGEtYWQtY2xpZW50PSJjYS1wdWItNjQ3MjA2OTY5MzY1NzE0MyIKICAgICBkYXRhLWFkLXNsb3Q9IjU4NDY0ODIyMjMiCiAgICAgZGF0YS1hZC1mb3JtYXQ9ImF1dG8iCiAgICAgZGF0YS1mdWxsLXdpZHRoLXJlc3BvbnNpdmU9InRydWUiPjwvaW5zPgo8c2NyaXB0PgogICAgIChhZHNieWdvb2dsZSA9IHdpbmRvdy5hZHNieWdvb2dsZSB8fCBbXSkucHVzaCh7fSk7Cjwvc2NyaXB0Pg==

Dow futures teased the lower-bound circuit breakers overnight, leading to a sharp decline at the start of New York trading. Volatility is soaring. Panic is rising. This feels a little bit like the March selloff all over again.

Strategist David Bloom at HSBC told Bloomberg this morning the fearful narrative from earlier in the year has come back with a vengeance.

Nowhere is this more obvious than the notorious ‘fear index’ or volatility index (VIX). The VIX tracks expected volatility in the S&P 500. And right now it’s back at late February levels, right before the sharpest selloff in history. A warning sign?

The sharp Monday decline follows a painful week of selling, including the worst session since the March plunge.

The S&P 500 Index is down 2% through the morning session. The technology-focused Nasdaq Composite Index declined 0.7%.

Will stocks hit limit down again?

During the March selloff, we saw a number of ‘limit-down’ days on the futures market. Dow futures were paused for trading multiple times after falling 5% in the after-hours session. Notably, it often happened on a Monday after a wave of panicked weekend news.

Are we about to see the same? Well, we came close this morning. Dow futures tumbled more than 3% at 2am ET but have since bounced back. Safe for now.

When the markets open, stock indexes can be paused for 15 minutes if they fall 7%. They’re halted for another 15 minutes after a 13% fall. And trading is closed in the case of a 20% drop.

As David Bloom at HSBC pointed out, last week’s Federal Reserve statement was probably the catalyst.

I think [Fed chairman] Powell knocked some sense into the market that was getting a bit euphoric.

Powell’s gloomy economic outlook pointed to a longer recovery than many investors were anticipating. 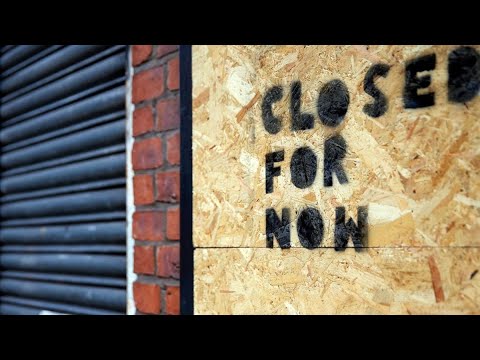 Panic also grew over the weekend with a string of negative headlines. Fears of a second-wave arose in the U.S. and China. Donald Trump is losing his grip on the 2020 election with Biden taking a huge leap in the polls. And up to a third of newly culled jobs could be permanent, according to latest estimates.

In another blow to the markets, Director of the United States National Economic Council Larry Kudlow confirmed that the White House will yank the $600 weekly unemployment boost in July. Traders were hoping for more fiscal stimulus, not less. While Kudlow hopes the move will incentivize job seeking, it may slash consumer confidence.

Despite the panic across the markets this morning, Morgan Stanley remains upbeat. Analyst Chetan Ahya doubled down on the bank’s cautiously optimistic stance in a note this weekend.

We have greater confidence in our call for a V-shaped recovery, given recent upside surprises in growth data and policy action.

Ahya said that central bank stimulus and improving economics suggest a V-shape is already playing out. Even a resurgence in hospitalizations is not a concern for them as flareups can be controlled by location, the note said. Only a full second lockdown would cause Morgan Stanley to shift to a bear case.

Johan Jooste at Global CIO Office agreed the market is pricing in a V-shape at these levels.

Yes, The US market is indeed priced for a V-shape, which is another way to say it’s priced for perfection.

Jooste, however, was more cautious and said the market was more driven by sentiment than hard data.