The Dow Jones Industrial Average (DJIA) pulled off another fantastic session today. This is what drove the stock market higher.

The Dow Jones rally gathered pace on Thursday afternoon as the White House did its best to pump risk sentiment back into the U.S. stock market.

President Donald Trump doubled down on his threat to bypass congressional deadlock with an executive order, while the CDC and State Department eased their “Do Not Travel” policies that warned Americans to avoid international travel.

Following a shaky start, all three of the major U.S. stock market indices rallied on Thursday.

Here’s where they stood minutes before the closing bell:

Continuing claims dropped too, clearing the way for optimism that Friday’s jobs report could be better than the disastrous ADP non-farm payrolls number suggested.

Video: U.S. Jobless Claims Are Starting to Come Down Again 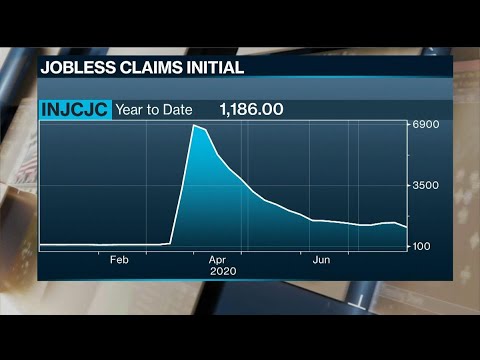 Obviously, it’s not good news that more than 1 million Americans have filed for unemployment during each of the past 20 weeks. The hope is that the U.S. economy has seen the worst of the damage and will only get better from here.

Sebastian Galy, a senior economist at Nordea Asset Management, says that although economic momentum is slowing, Friday’s jobs report could be “very decent” – all things considered.

He said in a statement shared with CCN.com:

High-frequency indicators, a weak ADP and unemployment initial claims stable at 1.4 million suggest a slowdown in US economic activity. Yet continued claims are falling suggesting a very decent print of Non-Farm Payroll on Friday, a point confirmed by the president, with the unemployment rate set to fall to 10.5%.

With no signs of an agreement between Democrats and Republicans, the next round of stimulus for the U.S. economy remains elusive.

Wall Street is extremely anxious about this, and Trump’s announcement that he would sign an executive order this weekend appeared to lift the Dow slightly.

With a focus on enhanced unemployment benefits and his long-desired payroll tax cut, Trump’s strong-man threat betrays a weakening hand. His polling points to an election day-rout, emboldening the GOP’s slumbering fiscal hawks to awake from hibernation.

Another positive development for the stock market came from the Centers for Disease Control and Prevention (CDC). The agency eased its advisory urging against all non-essential international travel. This corresponded with a move from the State Department to lift its “Do Not Travel” warning.

What could have been a disappointing day for the Dow 30 turned into another winning session thanks to a big rally from Apple. AAPL shares rose 3.25%, clearing the $450 mark in the process.

Another significant support for the Dow Jones came from Disney stock (+2.9%), which continues to bask in its unexpectedly-solid earnings report.

Fast-food giant McDonald’s followed closely behind with a gain of 2%.

Boeing stock was the worst-performing DJIA stock. BA shares fell 1.5%, though the rally in airline stocks could bode well for the aerospace manufacturer moving forward.

September 27, 2020 2 Comments
← PreviousNikola Can Only Blame Itself for Punishing Stock Meltdown
Next →Trump’s China Tech Attack is Bad News For the Stock Market