The Dow tiptoed higher on Wednesday, advancing toward a sixth straight winning session after President Donald Trump intensified his one-sided war of words with the “Boneheads” at the Federal Reserve.

The stock market’s last few sessions haven’t been spectacular, but they’ve been sufficiently bullish to keep the Dow Jones Industrial Average winning streak alive. On Wednesday, the Dow brushed off an early-morning dip to climb 107.95 points or 0.40%. The rally carried the DJIA past the 27,000 mark to 27,017.38.

The index is now primed to record its sixth straight advance and creep closer to its all-time high, which rests just below 27,400.

The Dow and its fellow indices benefited from a healthy dose of trade war optimism. Most notably, China announced that it would waive tariffs on 16 US goods for 12 months, beginning on September 17.

This is the first time Beijing has issued tariff exemptions for US products since the trade war began last year, and it precedes an important round of top-level trade negotiations that insiders believe could lead to a “breakthrough.”

However, President Trump continues to domineer Wall Street’s attention, first by firing National Security Advisor John Bolton, and then by launching a new attack against his “enemy” at the Federal Reserve, Jerome Powell.

Writing on Twitter this morning, Trump savaged the “Boneheads” at the Fed who are missing out on a “once in a lifetime opportunity” to slash rates all the way into negative territory and then leverage those rates to refinance the national debt.

The Federal Reserve should get our interest rates down to ZERO, or less, and we should then start to refinance our debt. INTEREST COST COULD BE BROUGHT WAY DOWN, while at the same time substantially lengthening the term. We have the great currency, power, and balance sheet…..

….The USA should always be paying the the lowest rate. No Inflation! It is only the naïveté of Jay Powell and the Federal Reserve that doesn’t allow us to do what other countries are already doing. A once in a lifetime opportunity that we are missing because of “Boneheads.”

According to CME’s FedWatch Tool, the market overwhelmingly expects the Fed to cut its benchmark target by 25-basis points to 1.75% to 2.00% at its policy meeting next week. However, the probability of the Fed maintaining its current target has climbed above 10% from 0% one month ago. The probability of a 50-basis point cut has declined to 0%.

Trump has long made the Federal Reserve a scapegoat on which to hang both slowing economic growth and stock market struggles. On multiple occasions, he has alleged that the Dow would be 10,000 points higher if the Fed “knew what it was doing.”

Despite Trump’s claims, interest rate cuts are not an unqualified economic boon.

Just today, Charles Schwab announced that it would lay off 600 employees, or 3% of its entire workforce. The reason? Low interest rates.

Perhaps best known for its stock brokerage service, Schwab is also the United States’ 13th-largest bank. According to CNBC, one of its largest income sources is net interest revenue. Falling rates have pressured that revenue by reducing the margin between loans and deposits. 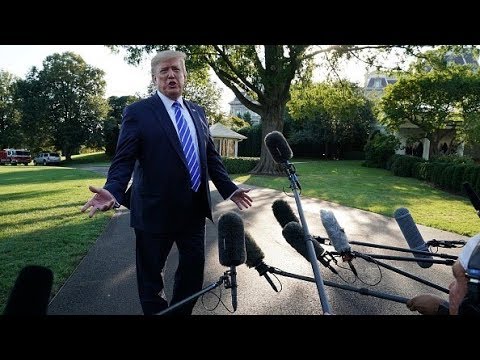 Speaking of Trump’s Twitter feed, it’s flashing an unconventional warning that could portend an end to the Dow’s five-day winning streak.

As CCN.com reported, Bank of America Merrill Lynch research found that the S&P 500 incurs an average loss of 9 basis points on days when Trump unleashes 35 or more tweets. That’s compared to an average gain of 5 basis points when he tweets five or fewer times.

Trump has not exceeded the 35-tweet threshold during the Dow’s current daily winning streak. However, according to Trackalytics, he has already tweeted 32 times today.