The Dow Jones Industrial Average (DJIA) surged higher on Tuesday, bouncing back after Wall Street’s worst day since the 2008 collapse.

Traders breathed fresh life into the stock market as the tide begins to turn in China’s coronavirus battle. In a breakthrough moment in the saga, Chinese premier Xi Jinping visited Wuhan – the epicenter of the virus – for the first time.

Zhang Ming, a professor at Renmin University in Beijing stated:

He is there now to reap the harvest. His being there means the CCP (Communist Party of China) may declare victory against the virus soon. 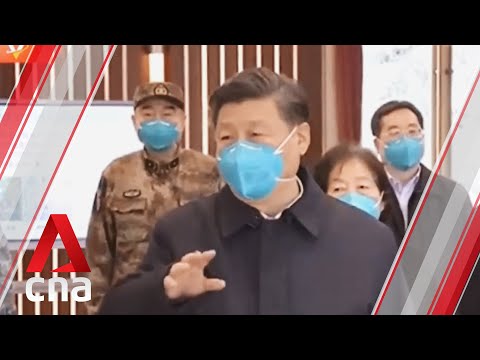 In a sign that China is reaching a turning point, new cases of COVID-19 in Hubei fell to 17 – the lowest since they began reporting. The Hubei region also relaxed some lockdown restrictions.

The U.S. stock market secured a massive recovery when the opening bell rang.

But all three major indices still have a substantial challenge ahead if they hope to reverse Monday’s historic losses.

Has China contained the coronavirus?

Xi Jinping arrived in Wuhan on Tuesday to meet with doctors, nurses, military personnel and volunteers. He visited the pop-up hospital Huoshenshan, built specifically to tackle the coronavirus outbreak.

His being there is a clear message to the world that China is confident that containment measures have worked.

It is obvious that Xi could not have visited Wuhan earlier because the risk of him contracting the virus there was initially too high.

Xi’s arrival in Wuhan saw an instant spike in the Chinese stock market. The Shanghai SSE Composite swung from negative into positive territory as he arrived. Shares in Wuhan companies saw an immediate boost higher.

Lu Kelly, an associate professor at Renmin University of China in Beijing, said this moment was crucial for global economic confidence.

Xi’s visit to Wuhan also heralds a message of confidence to the world that China is ready to keep marching forward… Whether the Chinese or world economy, as well as the global financial markets, the confidence is essential for the recovery.

China reported just 19 new cases of the novel coronavirus this morning – its lowest reading since reporting began on January 20th. No new cases have been reported outside Hubei for three straight days, suggesting that China’s lockdown has been successful.

Professor Zhu Lijia, from the Chinese Academy of Governance, stated:

Major progress has been made and a fundamental turning point has been achieved in China’s coronavirus battle.

Stock markets may enjoy a small bounce from this news out of China. But the question now is whether Europe and the U.S. can contain the spread.

In an emergency decree last night, Italy locked down the entire country after hitting 10,000 cases. And in an unprecedented fiscal response, suspended mortgage payments for its citizens.

All eyes are on the U.S. where lack of testing and transparency threatens to plunge the nation into chaos. Best estimates put the number of U.S. tests at 4,384, significantly below South Korea’s 100,000 and the U.K.’s 25,000.

The Dow also got an overnight boost from Trump’s emergency press conference. In a bid to calm the markets, he promised “very substantial relief” and “very dramatic actions” in response to the coronavirus.

The president’s fiscal response is expected to include a payroll tax cut and medical leave for hourly employees.

But while America waits for the true impact to hit, the situation in China is encouraging. The worst is over, as Matthew Graham, CEO of Sino Global Capital put it.

I’m calling it. Most of China will be quite back to normal very soon except for more remote work, online learning, and mask wearing. The worst is over.