Futures on the Dow Jones Industrial Average (DJIA) declined on Thursday after President Trump signed into a law a controversial bill backing protestors in Hong Kong – a move that could further strain to U.S.-China trade relations.

Futures on all three major U.S. indexes declined sharply through the early part of Thursday trading. Dow futures were off by as much as 144 points before paring losses. The index was last down 71 points, or 0.3%. 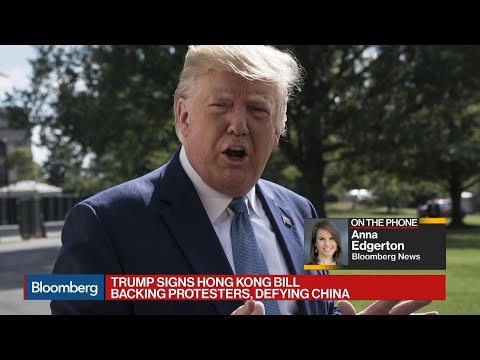 Asian equities came under pressure Thursday after President Trump signed a bill backing Hong Kong protesters, fueling concerns about the prospect of a ‘phase one’ trade deal with China.

The bill, approved unanimously by the Senate, threatens to impose sanctions on human rights violators in Hong Kong. Beijing condemned the legislation as “full of prejudice and arrogance.”

China’s ministry of foreign affairs issued the following statement, according to The Guardian:

This is a pure interference in China’s internal affairs…Such an act will make Chinese people, including Hong Kong compatriots, understand the sinister intentions and hegemonic nature of the U.S. … The U.S. plot is doomed to fail.

Investors fear that the Hong Kong bill cold derail already fragile trade negotiations between the United States and China. It has been more than a month-and-a-half since President Trump first teased an interim trade deal. An agreement has yet to be finalized and conflicting reports suggest both sides are further apart than initially believed.

Earlier this month, Reuters reported that a phase one trade deal was unlikely to be signed before the new year. But President Trump remains adamant that both sides are in the “final throes” of negotiations.