The Dow stands poised to suffer a sixth-consecutive loss ahead of Monday’s opening bell, with the US stock market bellwether enduring a triple-digit beating in the futures markets. All fingers are pointing to Boeing as the source of the index’s woes, but Federal Reserve Chair Jerome Powell’s comments about President Donald Trump in a 60 Minutes interview could have far more impact over the long-term.

As of 8:48 am ET, Dow Jones Industrial Average futures had plummeted by 198 points or 0.78 percent, and losses topped 200 points earlier in the session. S&P 500 and Nasdaq futures, in contrast, managed slight gains, with S&P 500 futures adding 0.15 percent to cross the 2,750 threshold and Nasdaq futures climbing 0.35 percent.

On Friday, the Dow recovered from an early-morning plunge but still closed 22.99 points in the red, and the 0.09 percent pullback represented the fifth-straight losing session and second consecutive weekly loss for the index. The S&P 500 and Nasdaq also recorded minor losses, with the former dropping 0.21 percent and the latter declining by 0.18 percent.

This morning, the Dow is reeling from the fallout of the tragic Ethiopians Airlines Flight 302 crash, which took the lives of more than 150 crewmembers and passengers. Its the second time a Boeing 737-MAX 8 has crashed in less than six months, and airlines including Cayman Airways have already suspended the use of that Boeing model pending an investigation.

Boeing shares crashed by nearly 11 percent in pre-market trading, dragging Dow futures to a triple-digit decline even as S&P 500 and Nasdaq futures crept to slight gains.

“Boeing stocks and more broadly airline stock will be in focus after the second deadly crash for Boeings new 737 Max 8 in just six months,” said Jasper Lawler, head of research at London Capital Group, in a note to clients cited by MarketWatch. “This tragic incident will be a massive hurdle for Boeing to overcome.”

So that’s what’s roiling the Dow on Monday; however, Federal Reserve Chair Jerome Powell’s comments in a 60 Minutes interview on Sunday could have a much more profound impact on the stock market over the long term.

Speaking during the 60 Minutes interview, Powell clapped back at the suggestion that President Donald Trump could fire him as Fed chair – or pressure him to resign. 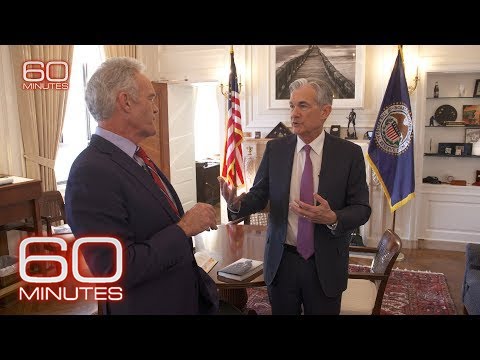 “The law is clear that I have a four-year term, and I fully intend to serve it,” Powell said, responding with a simple, unqualified “No” when asked whether Trump had the statutory authority to fire him under the scope of the Federal Reserve Act.

“We are directed to execute policy in a strictly nonpolitical way, serving all Americans, and that’s what we do. We are independent in that sense. Our decisions on rates can’t be reversed by any other part of government. Our accountability runs through the elected representatives and the oversight committees in Congress.”

According to reports, Trump had discussed firing the Fed chair, something no president has ever attempted to do. The administration denied those reports, but Trump has made no secret about his disdain for the Federal Reserve’s policy choices on Powell’s watch.

The president tweeted in January:

“Economic numbers looking REALLY good. Can you imagine if I had long term ZERO interest rates to play with like the past administration, rather than the rapidly raised normalized rates we have today. That would have been SO EASY! Still, markets up BIG since 2016 Election!”

A month earlier, as the Dow and wider US stock market flirted with bearish territory, Trump pressed send on this gem:

“I hope the people over at the Fed will read today’s Wall Street Journal Editorial before they make yet another mistake. Also, don’t let the market become any more illiquid than it already is. Stop with the 50 B’s. Feel the market, don’t just go by meaningless numbers. Good luck!”

Contrary to Trump’s past statements about him, Powell did not outright criticize the president or his administration during his 60 Minutes appearance. Indeed, he avoided taking that bait during the 60 Minutes interview, stating that it would not be appropriate for him to directly “comment on other elected officials or on the president.”

However, following several months of allegedly caving to pressure from Trump regarding Fed policies and their impact on the stock market, Powell is now making it clear that he does not intend to be Trump’s fall guy if the stock market fails to sustain its early 2019 recovery and slides back into the red in the months leading into the 2020 US presidential election.

People close to Trump say that the candidate plans to hang his reelection campaign platform on the US stock market’s performance since his election and inauguration. A downturn of any size would inevitably foil those plans, regardless of the Dow’s net gains since he first sat down in the Oval Office.

Consequently, if – as BMO analysts have forecast – the stock market retests its December 2018 lows and perhaps even breaks to the downside, Trump could amp up his attacks on the central bank. Maybe he would threaten to fire Powell, or even ignite a legal crisis by actually trying to remove him from office.

Such scenarios remain mere speculation at this point, but they introduce another degree of uncertainty into what should already be a disruptive 2020 election season.

Dow Spikes Midday as Quinnipiac Polls Show Biden Holding Strong Lead
1 Comment
← PreviousBoeing’s Catastrophic 737 Max 8 Should Be Avoided Like the Plague
Next →Netflix Soars 6,500% in 10-Year Bull Market: The Mind-Boggling Numbers if You Bought the Bottom in 2009