The stock market traded nervously on Monday following last week’s astonishing relief rally. The Dow Jones Industrial Average (DJIA) is struggling to build on those gains as March prepares to give way to April.

Investors are adjusting to the reality that coronavirus lockdowns may extend for months. A new report on ‘reopening’ America said restrictions shouldn’t be fully lifted until a vaccine is discovered. And, in the UK, the deputy chief medical officer said lockdown measures could be in place for six months.

Two or three months to see whether we’ve really squashed it, with about three to six months ideally … but then to see at which point we can actually get back to normal. It is plausible that it could go further than that. 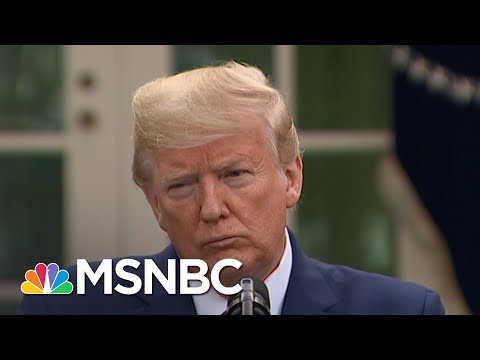 Six months of restrictions would have a devastating impact on the Dow Jones. Analysts say it will effectively put the economy into a coma for half a year.

[Coronavirus will] put most economies on life support — into some sort of deep freeze — that they can come out of in three, probably more like six, months.

Dow futures contracts swung wildly overnight, and the uncertainty bled into Monday’s regular trading hours. The Dow jumped at the opening bell, only to slide back into the red.

The president was forced to abandon his optimistic Easter deadline this weekend. He extended official restrictive measures until at least April 30th and admitted that 100,000 deaths was the best-case scenario.

I wish we could have our old life back… but we’re working very hard, that’s all I know. I see things, I see numbers, they don’t matter to me. What matters to me is that we have a victory over this thing as soon as possible.

But even April 30th is optimistic, according to former FDA Commissioner Scott Gottlieb. He thinks America will be right at the peak of the outbreak at that point.

It’s going to be another three, four weeks until we see the peak in the epidemic curve in regions like New York, and that’s the hopeful case.

In a new report, titled ‘National coronavirus response: A road map to reopening,’ published by American Enterprise Institute, the authors advise that America return to normal only at ‘phase III’ of the pandemic. But that requires a vaccine.

Once a vaccine has been developed, has been tested for safety and efficacy, and receives FDA emergency use authorization, states can move to Phase III.

Partial rollbacks can begin on a state-by-state basis earlier but only after two-straight weeks of declining cases. Author Gottlieb explains:

14 days after you start to see a sustained reduction in the number of daily cases, that’s the point at which you can contemplate lifting some of these measures that we have in place right now, some of these very aggressive social distancing measures. But you need to do it very gradually.

Advisor to the report and Director of John Hopkins Center for Health Security added that lockdowns may return if there’s a second wave of infections.

If monitoring shows the disease is starting to spread again quickly with relaxing of measures, states should be prepared to reestablish large social distancing quickly.

All of this brings us back to the economy and the stock market. The Dow Jones may not have priced in a deeper depression as a result of a six month containment period. Wells Fargo now predicts a 15% slump in the economy. Asked if there’s any chance of avoiding recession, the bank’s securities analyst Mark Vitner said:

He added that stimulus measures would “plug a hole” but won’t get the economy “roaring” again. With a raft of economic data on the calendar this week, expect another choppy session.