Stocks might be closed for Memorial Day, but traders can still flex their muscles on the futures market. And right now, Dow Jones Industrial Average futures are giving us an optimistic sign, up 250 points on Monday.

Markets continue to be driven mainly by liquidity. The S&P 500 runs in tandem with the global money supply.

Just look at this chart. The bounce in stocks since the March low perfectly tracks the global money supply. Much of that liquidity has been injected by central banks around the world since the crisis began.

Dow futures contracts ripped higher on Monday morning amid thin trading volume on Memorial Day. At 6.42 am ET, futures were up 250 points (1.02%).

7 trillion reasons why the stock market is rising

The U.S. Federal Reserve has pumped almost $3 trillion liquidity into the financial markets over the last two months. Co-head of Swiss and global equities at Union Bancaire Privee, Eleanor Taylor Jolidon says this is the over-riding reason behind the recent market rally.

The important subject is that we are seeing governments and central banks wishing to continue to support the economy and ‘do what it takes’, to quote a famous central banker. 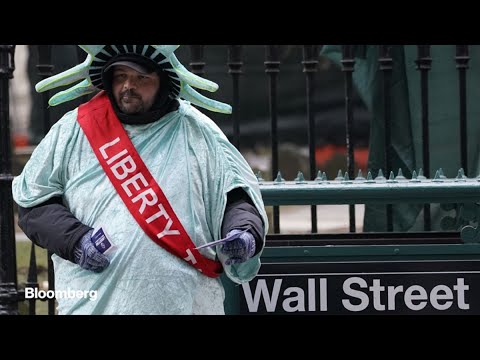 Chairman Powell has been aggressively buying treasuries, bonds, and mortgage-backed securities to prevent the markets from seizing up. In total, the Federal Reserve balance sheet has ballooned to more than $7 trillion, as of last week.

Powell’s compatriots at the European Central Bank, Bank of Japan, and China central bank have also kept the monetary taps running. This astonishing wave of liquidity has buoyed the stock markets. And it isn’t going to disappear. As Kathy Bostjancic, chief U.S. financial economist at Oxford Economics put it:

Despite the flood of liquidity, U.S. stock markets are racing head first into a brick wall of technical resistance. Both the S&P 500 and the Dow Jones are stuck below their 200-day moving average – a technical indicator used by traders to identify the long-term trend.

The S&P 500 is also plagued by the big, round, psychological number of 3,000. In other words, a battle is setting up at these levels and it will take strong momentum to push past them. Kevin Dempter at Renaissance Macro Research called it a ‘dogfight’:

A breakout is not likely to come easily and we expect a dogfight here around the 200-day.

Trump promises a ‘transition to greatness’ in 2021

There’s also a slight return to risk-on appetite as Donald Trump begins his re-election campaign. The president has promised a “transition to greatness” in 2021, in what will likely become a repeat campaign slogan.

The economy is vital to Trump’s re-election. And while the numbers are currently disastrous, he is expected to focus on the future recovery:

We built the greatest economy in the world. I’ll do it a second time.

The president’s grip on the economy is fading, however. In the latest polls, only 49% of the country approve of Trump’s handling of the economy, down from 56% last month.