U.S. stock futures traded slightly higher on Monday, as Democrats geared up to fight President Trump’s emergency declaration to fund a new steel barrier along the southern border with Mexico.

The New York Stock Exchange was closed for the holiday. Markets will resume regular trading hours on Tuesday.

The U.S. stock market is coming off another week of gains after the White House embraced apparent progress in China trade negotiations on Friday. Talks are expected to resume this week in Washington. Both sides have until March 1 to reach a new trade deal before tariffs on Chinese goods are reinstated. President Trump said last week he may let the deadline “slide” if both sides continued to make progress.

As the following chart illustrates, the Dow closed at more than three-month highs on Friday.

Surging stock prices have been accompanied by a sharp drop in volatility. The CBOE Volatility Index, also known as the VIX, fell to four-month lows on Friday.

Read more: Does this Chart Spell Doom for the S&P 500 Index? 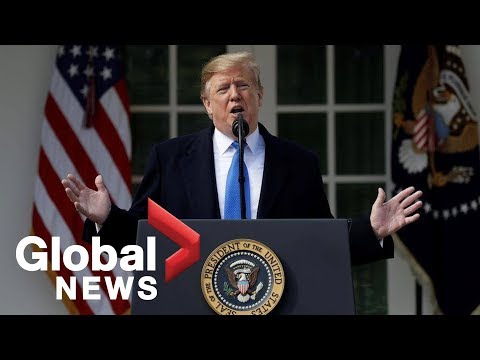 On Friday, President Trump exercised his emergency powers to fund construction of a new steel barrier on the U.S.-Mexico border after Congress refused to grant him full appropriations for the project. Analysts say that Trump will likely draw on budgets for military construction and anti-narcotics efforts.

Congress last week approved seven spending bills totalling $333 billion, but only $1.38 billion was allocated to increased border infrastructure. By declaring a national emergency, President Trump has the ability to divert funds from elsewhere toward the construction of the wall.

As The Wall Street Journal reports, the state of California has already announced plans to sue the administration over the emergency declaration. California Attorney General Xavier Becerra told ABC on Sunday that he “definitely and imminently” planned to pursue legal action against the administration.

Some Republicans have also come out against Trump’s emergency declaration. Senator Lamar Alexander, a Republican from Tennessee, said the declaration is “unnecessary, unwise and inconsistent with the U.S. Constitution.” He and others were quickly criticized by Republican Representative Jim Jordan, who heads the conservative Freedom Caucus.

“Those Republicans who are criticizing the president for wanting to do this executive order are the same kind of Republicans who just a year ago didn’t want us to debate and push for the wall funding when we had the majority in both the House and the Senate,” he said, according to WSJ.