Another day of risk-on trading launched the Dow Jones nearly 400 points higher on Thursday, as the US and China finally have a date to renew trade talks.

Market bulls are betting that we have seen the worst of the trade war and are enjoying the resiliency of the US economy.

By Thursday’s closing bell, the Dow Jones Industrial Average had secured a gain of 372.68 points or 1.41%. The stock market’s bellwether index settled at 26,728.15, shedding more than 100 points from its intraday high.

The S&P 500 rose 1.30% alongside the Dow. The large-cap index has now rallied for five of the last six sessions, putting it on the precipice of all-time highs again.

Jobs numbers were encouraging, with the non-manufacturing sectors continuing to look robust.

The oil price gave an additional boost to sentiment in the US, as crude inventories dropped by four million barrels, two million more than expected.

However, behind the scenes of all this good news, a bearish scenario could be forming for the Dow.

Unfortunately for Wall Street bulls, a strange paradox is unfolding. While the outlook improves on trade, the scale of Fed easing diminishes, a consideration that stock markets appear to be ignoring. Looking beyond the weakness in manufacturing, stability in the jobs market – along with this morning’s trade war progress – has brightened the economic forecast.

It is precisely this positivity that has James Knightley, chief economist at ING, concerned. Knightley believes the market could be overestimating the amount of easing that the Federal Reserve will employ against this brighter outlook for stocks, as he wrote today:

“Despite the current doom and gloom surrounding trade and manufacturing, today’s US ISM non-manufacturing survey and yesterday’s Federal Reserve’s Beige book offered evidence that other parts of the economy continue to grow strongly. In such an environment the Federal Reserve will remain reluctant to deliver the scale of easing demanded by the President and priced by markets”

Such an outcome could be horrible news for the Dow, particularly if Trump were to ramp up his Fed assaults on Twitter.

Bank stocks launched higher in one of the biggest 2-year yield rallies in years, making Goldman Sachs and J.P. Morgan Chase two of the top-performing companies in the Dow 30 today. Shares of both firms rose more than 2.4%.

Caterpillar (CAT) has been loving the global risk-on move, and it leads the Dow’s biggest stocks with a 3.3% gain. 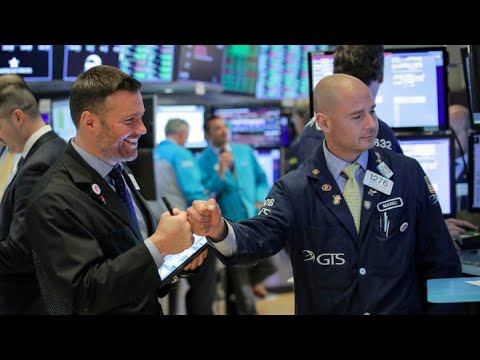 Only the defensive sectors looked to be in trouble, and Coca-Cola was a noticeable laggard, 0.66% in the red.

Chopping between losses and gains on the day, Johnson and Johnson stock was last down 0.03%.