The Trump administration blindsided the Dow Jones on Tuesday with the decision to blacklist 28 Chinese companies for their involvement in human rights abuse issues in the Xinjiang region.

China’s retort further hit the stock market as they lowered expectations for trade talks by cutting their planned stay short. However, the Dow recovered from its lows as the sheer scale of the Chinese trade delegation raised hopes for some progress.

The Federal Reserve also pitched in with some dovish commentary.

The Dow Jones Industrial Average was the best performing of the major US indices on Tuesday, as both the Nasdaq and S&P 500 fell more than 0.5%

Further pressure on the stock market came in the form of a surging US dollar. The catalyst for this was a senior aide to UK PM Boris Johnson saying a Brexit deal now looks impossible after a call with German leader Angela Merkel. This sent both the British pound and euro lower and boosted the DXY.

Donald Trump’s decision to announce the blacklisting of Chinese companies right before critical trade talks can only be described as a tactical decision. This last-minute squeeze, on the face of it, may have hurt negotiations since China reacted negatively, but applying maximum pressure on Beijing is likely part of a longer-term strategy

A weak Caixin Services PMI shows the Chinese probably want some kind of limited deal soon, as the size of their trade delegation demonstrates.

🇨🇳 🇺🇸 "Observers said that the composition of the Chinese delegation, one of the largest and broadest teams among the 13 rounds of trade talks, signaled that China is sincerely looking to reach a comprehensive trade deal with the US." – Global Timeshttps://t.co/RE9jjmuuzF

Last week, top Trump economic advisor Larry Kudlow hinted at a positive surprise, and the Dow looks to be clinging to this optimism. On the other hand, it’s worth noting that Bloomberg’s report on the US limiting inflows to Chinese equities may have been correct after all, even if the administration cried fake news at the time.

Adding further complications, the NBA drama continues to rumble on in the background.

Another factor helping keep the Dow Jones afloat is the expectation of plenty of easing from the Federal Reserve.

While a dovish Fed has been priced in, Senior Economist Bill Diviney at ABM AMRO believes there is still a major risk of hawkish rebellion in the FOMC. Voting hawks Eric Rosengren and Esther George are refusing to give ground, as the analyst writes:

“We have for some time expected a weakening in incoming data to drive the Fed to cut at both meetings [October & December]. However, it looks as though it will take more to convince hawks on the Committee of the need for further cuts, based on commentary at the weekend from Boston Fed president Rosengren and Kansas Fed president George. Both are voting members this year, and both dissented against the recent cuts by the Fed.”

Providing context for their outlook, Diviney pinpointed the following two comments as evidence of these two members’ reluctance to vote for more easing:

“George downplayed the undershoot of the Fed’s target as ‘by itself, not a compelling justification for providing additional monetary policy accommodation’. Rosengren meanwhile focused on the relative strength of consumption.”

Dow bulls are longing for two more rate cuts this year and would almost certainly throw a bearish tantrum if Powell doesn’t deliver over the next few months.

On Tuesday, Powell revealed that the Fed plans to begin expanding its balance sheet “soon,” which appeared to lift US stocks in late afternoon trading.

Is calming markets part of the Fed’s charter? https://t.co/7OQDx0jQP8

It was a fragile day for the Dow 30, as China woes hit most of the big players hard.

Dow Inc. and Cisco were the worst hit; they slid around 1.75% in the turbulent trade environment. 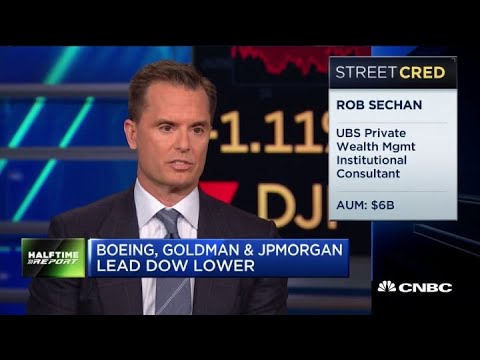 Boeing ticked nearly 0.2% higher, ignoring both China-related fears and the fact that fresh obstacles in Europe might provide additional delays to the 737 MAX’s return to the skies.