By CCN.com: The stock market shot higher on Friday, enabling the Dow to slam the brakes on its multiday decline. Meanwhile, President Trump dropped the shocking announcement that controversial Federal Reserve nominee Stephen Moore had yanked his name from consideration.

Today, the stock market zoomed higher after the April jobs report revealed that unemployment had fallen to its lowest level in nearly 50 years and Warren Buffett divulged that Berkshire Hathaway had been quietly gobbling up Amazon stock.

However, there’s another headline that will impact the Dow and its sister indices for years to come.

On Thursday afternoon, Donald Trump announced on Twitter that Stephen Moore would no longer seek a post on the Federal Reserve Board of Governors. Moore, a fellow at the conservative Heritage Foundation, had been a champion of Trump’s deregulatory policies and looked to continue to serve White House interests at the supposedly-independent Fed.

….and deregulation which have produced non-inflationary prosperity for all Americans. I’ve asked Steve to work with me toward future economic growth in our Country.

Moore’s heterodox economic ideas – he was a Fed pick with a long track record of anti-Fed rhetoric – and controversial writings had attracted fire from Democrats and Republicans alike.

However, it’s not entirely clear why Moore withdrew his name from consideration, or if it was even his decision at all. Remember, it was Trump who made the announcement, just hours after Moore told Bloomberg that he was “all in” and would only withdraw at Trump’s request. 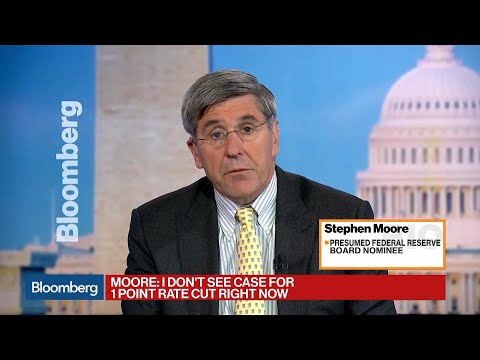 Moore subsequently claimed that the “unrelenting attacks on my character have become untenable for me,” but it’s unlikely that the weight of those attacks suddenly tipped the scales in the hours following his Bloomberg interview.

Trump Faces Another Embarrassing Setback in Quest to Stack the Fed

Regardless, it’s an embarrassing setback for Trump, one that comes less than two weeks after pizza tycoon and political commentator Herman Cain – another of the president’s controversial Fed nominees – dropped out of the running as well.

Trump fervently desires to continue heaping fuel on the red-hot US economy, as he believes a booming Dow will virtually guarantee him a victory in 2020.

Toward that end, has sought to stack the board with political allies after finding that he cannot bend Fed Chair Jerome Powell to his will and force him to do the administration’s bidding.

Just this week, the Powell-led Fed openly defied Trump’s demand for an interest rate cut, a move that stunned Wall Street and plunged the stock market into a two-day decline.