Nick Cannon has a new job – or at least a job offer.

Just hours after being fired by Viacom for making anti-Semitic remarks, Diddy told the sometime rapper and television host to “come home” to Revolt TV.

Wait a minute – is this the same Diddy who blasted Eminem for mentioning Revolt TV in a leaked track?

To be fair, Nick Cannon quickly apologized for his anti-Semitic remarks.

In a Facebook statement, he made clear that while he was a fan of Louis Farrakhan, his comments had “no ill intent” towards Jewish people:

In today’s conversation about anti-racism and social justice, I think we all – including myself – must continue educating one another and embrace uncomfortable conversations – it’s the only way we ALL get better. I encourage more healthy dialogue and welcome any experts, clergy, or spokespersons to any of my platforms to hold me accountable and correct me in any statement that I’ve made that has been projected as negative.

And because of this apology, he got to keep his hosting job on “The Masked Singer.”

A Bit Hypocritical On Diddy’s Part, Don’t You Think?

The next day, Diddy offered Nick Cannon a job.

Let’s be reminded that this is the same Diddy who slammed Eminem for mentioning Revolt TV in a verse that leaked just as the Black Lives Matter movement was making headway into the cultural mainstream.

And don’t forget this is the same Diddy who refuses to give his artists their masters (with Mase being the most notorious example). His claims of being pro-Black fall a little short when you consider he takes advantage of his Black artists. 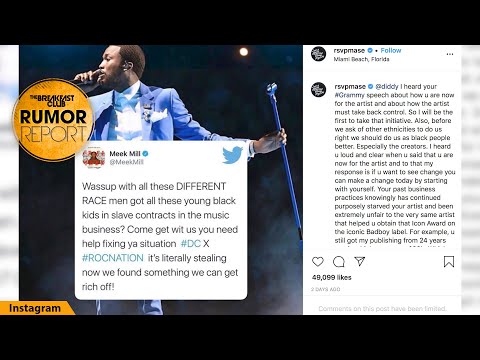 While Nick Cannon deserves a chance to redeem himself, he must be held accountable for his poor actions. This accountability doesn’t involve getting a cushy new job offer less than 24 hours after losing his last one.

As for Diddy, well, he needs to explain why he’s okay with anti-Semitism but not with Eminem dissing him in a song.

You’ve got a lot of explaining to do, Sean.

Editor’s note: The original version of this article incorrectly stated that Nick Cannon is the host of “America’s Got Talent,” which he actually left in 2016. The article has been updated to reflect that he is currently the host of “The Masked Singer.”