The Democrat-led U.S. House Judiciary Committee has initiated a rather broad investigation into President Donald Trump that will explore themes of obstructing justice, corruption, and abuse of power.

Trump told reporters Monday he won’t get in the way of the Democrats’ new investigation:

“I cooperate all the time with everybody. You know, the beautiful thing, no collusion. It’s all a hoax.” 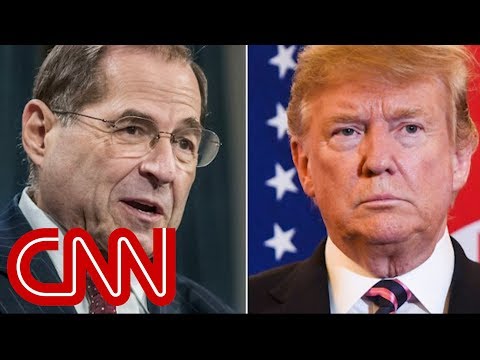 Rep. Jerry Nadler (D-N.Y. 10th District), chairman of the judiciary committee in the lower chamber of the legislature, announced that the committee “served document requests to 81 agencies, entities, and individuals relevant to the investigation.”

Responding to questions about why the impeachment has not started, Nadler told ABC on Sunday:

“We do not now have the evidence all sorted out and everything to do — to do an impeachment. Before you impeach somebody, you have to persuade the American public that it ought to happen.”

When you go out to search for “obstruction of justice, public corruption, and other abuses of power,” is anyone connected to Trump exempt from scrutiny? Will Trump’s childhood barber get a document request?

The ambiguity of the House Judiciary investigation may be intentional since the probe’s open-endedness allows Democrats to drag out the probe for as long as they see it as something that helps them in the run-up to the 2020 elections.

On March 3, Nadler said he already believes Trump obstructed justice. This spurred Rep. Jim Jordan to decry the investigation as an unscientific one that took its conclusions first and now seeks to compose a fact-set that fits Nadler’s predetermined judgment.

C’mon @RepJerryNadler—at least pretend to be serious about fact finding.

What a Kangaroo court. https://t.co/BpNIzdON1e

Democrats Have One Foot In, One Foot Out of the Impeachment Bucket

If House Democrats are planning to impeach Trump, it may fit into a reelection strategy painting Democrats as emotionally volatile and unhinged.

And to be clear, Democratic leadership has yet to produce a unified message as to whether impeachment is a smart political strategy. Nadler’s investigation – notably taking place in the Judiciary Committee – would likely be cited in impeachment proceedings. And Nadler has been palling around with Tom Steyer, a billionaire who has spent $40 million on a campaign to generating support for the impeachment movement.

It’s anyone’s guess if the Democrats want to actually impeach Trump as a partisan strategy. House Speaker Nancy Pelosi (D-California) sounded as if she had put the nail in the coffin of impeachment efforts last year, saying:

“If there’s to be grounds for impeachment of President Tump – and I’m not seeking those grounds – that would have to be so clearly bipartisan in terms of acceptance of it before I think we should go down any impeachment path.”

With the Senate firmly secured in the Republican Party’s favor, relying on “bipartisan” agreement between House Dems and Senate Republicans is all but a death knell to impeachment efforts.

This is one of the strangest things about the Democratic Party. Polls suggest an overwhelming majority of Democrats want Trump impeached, yet the position of the most powerful Democrat in the House is that it’s only a good idea if Republicans want to move forward with it.

Plenty of Republicans secretly cheer for Democrats to push forward with the impeachment agenda, banking on the hope that backlash from a failed attempt at impeachment would make Trump look more moderate just in time for the 2020 election.

“In interviews, more than a dozen Republican politicians, activists and consultants — including some current and former Trump campaign aides with direct lines to the president — said they are increasingly convinced a Democratic House victory in the midterms and subsequent impeachment push would backfire and ultimately help the president in 2020.”

Here’s a glimpse at what one GOP insider told Politico, a Washington-based publication:

“Well-respected thinkers believe that the more extreme Democrats go, the more middle of the road voters will gravitate to Trump.”

‘Obstruction’ Angle Was Born After the ‘Collusion’ Angle Died

The argument that Trump should perhaps be impeached for firing FBI Director James Comey slowly was born when it became obvious the Russian collusion attack against Trump was losing legs. Why should the House investigate Trump for obstruction of justice when Special Counsel Robert Mueller has already been looking into this potential crime for almost two years?

After Democrats came up short of finding evidence linking Trump’s campaign with the hacking of Democratic email databases in 2016, the Russian collusion narrative all but fell apart.

“I would not be surprised if Bob Mueller concludes that the Trump campaign did not violate the law with regard to its interactions with the Russians. I’m really open to that possibility. Why? Because, as you know, The New York Times, The Washington Post, every media outlet that is worth its salt has reporters digging into this, and they haven’t found anything.”