Andrew Yang has spent most of the race as a maverick, but now his ideas are becoming part of the mainstream.

When the entrepreneur first announced his presidential run in late 2018, Yang stood out as the only candidate speaking about ideas like the freedom dividend and the fourth industrial revolution. But now, multiple fellow candidates, including three front runners, are beginning to sound eerily similar to the political outlier.

The freedom dividend, or universal basic income (UBI), is Yang’s flagship policy. He maintains that providing every U.S. adult over 18 years old with a guaranteed income of $1,000 a month will help soften the blow from automation, or the fourth industrial revolution.

Recently, Democratic front runners Elizabeth Warren and Pete Buttigieg said UBI is a policy they could potentially be on board with.

Speaking with The Washington Post, the Senator from Massachusetts claimed UBI was an “option to consider” to ensure that “every American has basic financial security.”

In March, Mayor Buttigieg made similar comments. Speaking with host Jake Tapper during a CNN Town Hall, Buttigieg explained how UBI was being experimented in Stockton, Calif. He went on to say that UBI is a policy that could be considered.

Following the Town Hall, a YouTube video uploaded by The Zach and Matt Show revealed striking similarities between Buttigieg’s comments and Yang’s. 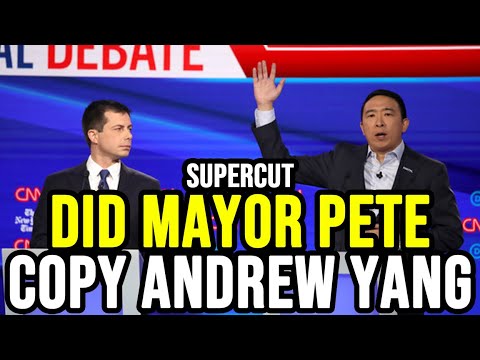 Two other Democratic candidates have also endorsed the idea of UBI. Reaching out to the Twitterverse in October, Julián Castro announced he supports “piloting a Universal Basic Income program.”

Rep. Tulsi Gabbard also praised Yang’s idea during the fourth Democratic debate in Ohio. During the contest, Gabbard called Yang a friend and said she thought UBI was “a good idea.”

In September, Joe Biden appeared on “The Late Show with Steven Colbert.” During the interview, Biden spoke about the rapid development of automation.

The former Vice President let the veil slip about where he got the idea from when he said:

We’re in the middle of what I call, what other people call, the fourth industrial revolution…. Look what’s happened to all the retail jobs that got lost because of Amazon now.

Following the interview, The Zach and Matt Show published another video highlighting the similarities between Biden’s comments and Yang’s. 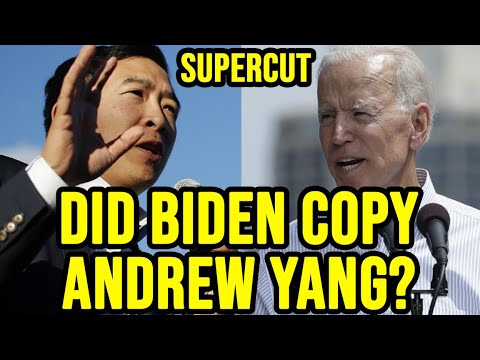 Why Are Candidates Copying Yang?

According to the latest national polling from Real Clear Politics, Yang currently places sixth in a field of 18 candidates. This is a remarkable feat for the entrepreneur, but he faces a herculean task to catch up to top-tier candidates.

According to the same poll, Yang is currently 17 points behind Warren in second place and 24.2 points behind Biden, who is leading the pack.

Unfortunately for Yang, the math gets worse. If his poll numbers don’t improve before Dec. 12, he faces missing out on the sixth primary debate in California.

Yang could be forced to throw in the towel altogether if he fails to produce a strong showing in Iowa. And if Yang drops out, what happens to the Yang Gang? This is the question burning in the minds of Biden, Warren, and Buttigieg. It also helps explain their recent acknowledgment of issues like automation.

Recent polling data suggests the Democratic nominee will need Yang’s supporters to take on Trump in 2020. For example, an Emerson College poll of New Hampshire released in September revealed yang beats Trump by 54% to 46%.

Fans of the math enthusiast will be drawn to the politicians who talk the same game about UBI and job automation.

It is possible that the 2020 front runners are warming up to the idea of UBI because they believe it’s what America needs. But it’s also possible their reasoning is more sinister. Biden, Warren, and Buttigieg want the White House – and the Yang Gang could be their golden ticket.