By CCN.com: Death Stranding is a batsh*t crazy action adventure game that straddles the line between this world and the next. Created by Metal Gear Solid superstar game designer Hideo Kojima, Death Stranding pits players against all sorts of weird and wacky foes in a post-apocalyptic experience with a twist.

Kojima Productions recently released the latest trailer for the upcoming release and its pretty substantial so strap yourself in: 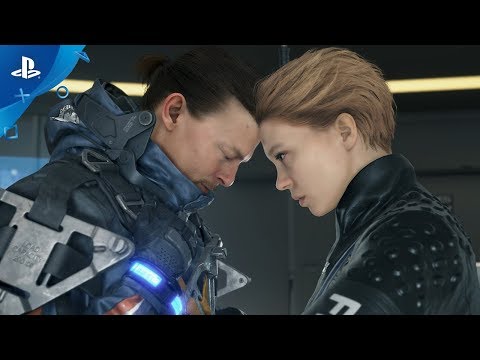 The Trailer Leaves More Questions Than it Answers

If you weren’t creeped out before you sure will be now. With ghostly figures known as BT’s and the chest-strapped bridge babies you use to locate them, it’s anything other than a day in the office for regular gamers.

The basic premise of the otherworldly game revolves around Sam Bridges who appears to be nothing other than a glorified mailman. Sam must deliver his precious cargo between isolated cities and reconnect fragmented societies in the new world. The massive open world means players will have to come to terms with:

The trailer has so many holes in its plot, it’s ridiculously frustrating. And that’s the point. This contributor doesn’t have a PlayStation but he may want to borrow one just to figure out where all this mystery leads.

Death is Not the End My Friend

Kojima pioneered stealth mechanics in gaming with the Metal Gear franchise. The latest footage suggests he’ll be bringing a nice range of elements to Death Stranding, including puzzle, combat and, of course, shadows tactics. In fact, it appears that dying in-game is an integral part of the story and one you cannot escape from. As a previous version of the official site stated:

…you’ll find yourself in an upside-down realm, searching for a way back to the living.

That’s a refreshing break from a long-established tradition where staying alive at all costs is usually the norm. It remains to be seen how that mechanic will function though. In the meantime, Kojima’s official tweet on the trailer is revealing some serious fans:

The Irony of Death Stranding’s Message

Japan has a rich culture steeped in spiritual tradition that embraces the modern. It’s clear that Kojima is using his wealth of experience and cultural background to send a very personal message to his audience. As his tweet further reveals:

People have built ‘Walls’ and become accustomed to living in isolation… Through your experience playing the game, I hope you’ll come to understand the true importance of forging connections with others

Nobody can deny the importance of his statement. But in a world where loneliness has risen to epidemic proportions, you can’t help but observe the irony in his message. Video games draw people together from all walks of life and digital communities will spend days engaging in speculation and fanfare online.

What many gamers won’t do, however, is go outside, sit in the sun and just engage with their fellow human beings. No amount of screen time will fix that. Let’s hope his fans get the message. Tomorrow is in your hands’ gamers, though you’ll still have to wait until November 8th until the game is released. Death Stranding will only be available for the PS4.