Retailers racked up $7.4 billion in online sales on Black Friday, making it the second-largest online shopping day in history, narrowly behind Cyber Monday 2018 when sales hit $7.9B.

But Adobe Analytics predicts Cyber Monday 2019 sales will shatter last year’s record and hit $9.4B, an increase of nearly 20%.

For the full holiday weekend, Adobe Analytics predicts sales to top $29 billion, up from 19% in 2018.

Although the weekend was an emphatic triumph for e-commerce retailers, the reality was a little different for stores dependent on physical traffic.

According to Retail Dive, the number of shoppers visiting stores over the weekend declined 3% compared to last year. On Black Friday alone, physical store visits dropped by 6.2%.

Rocketing digital sales are no surprise. By offering access to an abundance of products, one-click buying, and quick delivery, E-commerce has become invincibly convenient for shoppers.

The growing popularity of digital shopping was highlighted in a recent survey by Business Insider and Morning Consult.

The nationwide survey asked 2,300 American adults about their shopping preferences.

The results showed 58.2% of participants prefer shopping on Cyber Monday, compared to 41.8% who prefer Black Friday.

The infatuation with e-commerce is easy to understand, but the desire for convenience could have dire consequences.

When retailers lose physical traffic, they also lose the need for cashiers, cleaners, inventory specialists, security guards, and managers. And sometimes, they have to close up shop for good.

Over the next four years, 300 malls are expected to shut down with hundreds more struggling to operate.

This trend could prove catastrophic for in-store workers. Almost 5 million Americans currently work as retail sales clerks in the US, with this number expected to shrink by at least 2% over the next decade.

One person working out the math from this past weekend will be 2020 Presidential Candidate Andrew Yang.

Since announcing his bid for the White House last year, the Democratic hopeful has been outspoken about the gifts and threats of the digital economy.

The entrepreneur argues workers at-risk of displacement could be helped through forcing tech giants like Amazon to share their winnings.

According to CNBC, in 2018 “Amazon paid $0 in U.S. federal income tax on more than $11 billion in profits before taxes.”

To make Amazon pay up, Yang has proposed a 10% value-added tax (VAT). This tax is already being used in 160 countries and every developed country – except the United States.

Speaking after a Democratic Debate in September, Yang explained to ABC News:

If we give the American people… even a tiny slice of every Google search, every Facebook ad, every Amazon sale, and every robot truck mile, we can generate hundreds of billions of dollars in revenue very very quickly.

Revenues from the VAT would go towards the entrepreneur’s signature policy, the “Freedom Dividend,” or universal basic income (UBI). Yang argues that a monthly stipend of $1000 for every American adult would help displaced workers as they navigate between jobs. 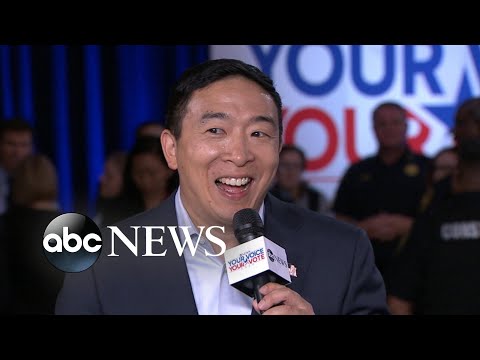 If elected, Yang says he’d also do something about the empty lots left behind by mall closures:

These giant spaces need to be revitalized in order to spur investment in the local economy and combat the sub/urban blight associated with the closing of a mall.

Malls remind me of my childhood. We should help more of them transition to new communal uses rather than let 30% of them close to become blighted sinkholes that blast property values for miles around. https://t.co/3Iu2CTvfHW

Despite his proposals, Yang faces an uphill battle in the race for the Oval Office.

But if Yang did defy the gargantuan odds, imagine the tax revenues from Cyber Saturday in 2021.