Colby Covington returns to action at UFC 245 against welterweight champion Kamaru Usman, and as usual, his trolling outside the cage has generated more headlines than the bout.

Covington wasn’t always as controversial as he is these days. For the first three years of his UFC career, he kept his mouth mostly shut and quietly amassed a 7-1 record.

Unfortunately for Covington, that didn’t get him very far. In fact, it almost cost him his job with the UFC.

According to Covington and his management team, UFC brass made it clear in 2017 that they weren’t interested in re-signing him once his contract was up – a decision they’d come to after another dominating but dull decision win over Dong Hyun Kim in Singapore.

It was at this point, Covington told ESPN, that he decided to take a page from the pro wrestling playbook and turn heel. In the final fight of his UFC contract, he coasted to another decision win against Demian Maia in Sao Paulo, Brazil. 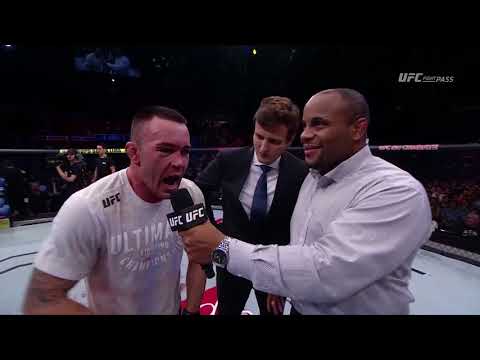 The fight was forgettable, but what Colby said on the mic afterward is still earning the wrestling specialist death threats two years later.

Brazil, you’re a dump! All you filthy animals suck!

It was ugly and blunt and xenophobic, but it made the desired waves. Covington’s tirade was the biggest news to come out of the event, and suddenly people cared enough about him for a new deal to be struck with the UFC.

After that, Covington stoked fans’ hatred towards him at every opportunity. He spoiled the ends of Avengers: Infinity War and Star Wars: The Last Jedi on social media. He became a near-parody of a rabid Donald Trump supporter, “triggering snowflake liberals’ everywhere.

From speaking ill of Kamaru Usman’s dead manager to drudging up the stolen nudes of female fighters, there was no line he wouldn’t cross. Whether it was an act or not became irrelevant to many. People hated his guts either way.

Biting the Hand That Feeds

It would be one thing if it was just fans and fighters hating him, but Colby Covington has become a thorn in the side of UFC brass as well. After getting passed up for a title shot, he tracked down Dana White at a blackjack table in Vegas and confronted him.

Here is Colby Covington looking for (and finding!) Dana White, who was gambling at the Palms, to confront him about why he is not fighting for the title at #UFC235 this weekend. pic.twitter.com/ej98P2hvXz

Leading up to this championship fight at UFC 245, he declared he’d slap White if the UFC president tried to put the belt around his waist. A visibly annoyed White responded to the threat after UFC on ESPN 6.

Good luck with that. He’s a bigmouthed f**king idiot.

As usual, it’s hard to tell where Covington’s promotional act ends and his real gripes with the company begin.

The UFC stripped him of his interim welterweight title when surgery kept him from fighting then-champ Tyron Woodley on their schedule. Then there was the aforementioned title shot shuffle that saw Kamaru Usman take Covington’s place and win the belt off Woodley.

Negotiations to set up Usman vs. Covington turned sour when the promotion offered Colby less show money than he’d earned in his last non-title fight. Speaking to Submission Radio, Covington made it clear that winning the belt was all about negotiating power.

This is an opportunity for me to just really shove this up the UFC’s a** and say, f**k you guys, I don’t give a f**k about you guys, now you have to come to me. So, you’re gonna be calling me after December 14th begging to get me back in there.

Covington certainly wouldn’t be the first UFC champion at odds with upper management. But we’ve certainly never seen someone as outspoken and utterly shameless as “Colby Chaos” in that position before.

If a full-on war breaks out between Covington and the UFC, it could be a battle to rival anything we see in the cage on Saturday night.