The tension between the U.S. and China ratcheted up once again this week as Secretary of State Michael Pompeo announced that the U.S. would hold off on an annual report on Hong Kong’s autonomy. The move reopened old wounds for Beijing, which accused the U.S. of interfering in internal affairs back in November when the Hong Kong Human Rights and Democracy Act was being discussed in congress.

If China is found to be chipping away at Hong Kong’s autonomy, the city could lose its “special status,” which allows Hong Kong to conduct financial transactions with the Western World.

The U.S. involvement with Hong Kong is just one layer of the building tension between the two nations. In recent weeks, Donald Trump and members of his administration have been doubling down on accusations that the novel coronavirus was created in a Wuhan lab and that China’s mismanagement and lack of transparency caused the worldwide pandemic.

China’s state-run media tweeted this video in response to U.S. criticism of their handling of coronavirus |Source: Twitter

China, of course, hasn’t taken kindly to the allegations, especially as world leaders including Trump mull over potential reparations from Beijing once the pandemic is over. In response, the nation has taken aim at Mike Pompeo calling him a liar and “rumor-monger.” Media in China point to Pompeo’s ongoing attacks against China as evidence of America’s moral bankruptcy.

The back-and-forth between Washington and Beijing spells trouble for the trade deal between the two, which was in danger of failing even without the increased bickering.

In the Phase 1 deal that the two agreed to back in 2019, China agreed to buy $200 billion worth of U.S. goods and services over the next two years. Considering coronavirus is expected to crush China’s economy this year, that’s unlikely to happen.

But according to the terms of the deal, China doesn’t have to meet that target if a force outside of its control prevents it from making all of those purchases. Coronavirus is acting as that force, but whether or not it was outside of China’s control is still debatable.

Pompeo and Trump’s relentless insistence that China has been hiding the truth could be setting the stage for Donald Trump to demand Beijing make good on its $200 billion worth of purchases.

But Donald Trump is toeing a dangerous line as his relationship with Beijing deteriorates. Last year we saw the trade deal drive markets as progress was made and lost throughout the year. The same kind of volatility can be expected again this year if the two sides begin another dispute. Only this time, there’s far less upside.

Back in 2019 when unemployment rates were low and the economy was humming along, the U.S. could afford to take a hit from the trade dispute with China. Now, that’s not the case. The economy is balanced on a knife’s edge right now and unemployment has risen to shocking levels. Adding a trade war to the mix would spell disaster for the U.S. stock market’s fragile rally.

U.S.-China trade tensions look like something that will pick up. That’s probably the number one concern in the market when we talk to investors and sell-side analysts.

Zhang isn’t alone in his assessment of the rising tension between the two nations. Experts in both nations say this is the worst US-China relations have been in 50 years. 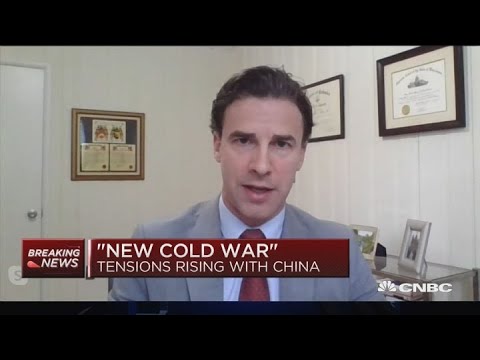 The bilateral relationship is arguably at its lowest point since 1972. [With these] accusations and conspiracy theories, I feel very bad about the trend of the relationship

Wharton Dean Geoffrey Garrett has said he believes the two sides will keep the trade deal together for the sake of their economies. But Garrett also said he sees the ordeal erupting into a full-blown conflict in the longer-term.

I fear the ultimate price of deglobalizing will be measured in terms of increased geopolitical instability and the greater chance of conflict between China and the U.S. above all.