Theresa May is now backing an extension to Article 50. In a wild turn of events, the UK’s prime minister who has long opposed elongating the Brexit process is now pushing to leave “before May 22nd.”

Just for fun, here’s a video of Theresa May pushing back against the idea in February. 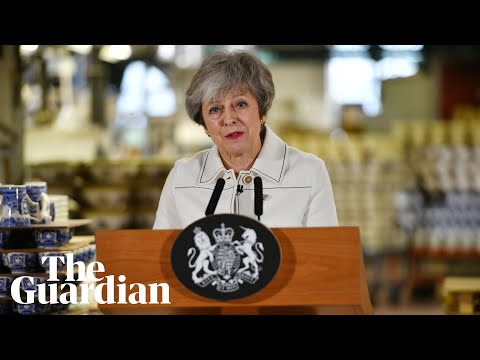 While Theresa May has zero credibility, it’s staggering that she is still here at this point. She appeared to be resigning a week ago, but only offered her head as a last-effort to make her party vote for her deal. You know your party hates you when self-sacrifice is your best option. She is now looking for “unity” and a short extension to Article 50. The extension shouldn’t be too long though, as the PM will want to leave before the summer, so the UK doesn’t have to vote in EU elections.

Prominent opponents to Theresa May are rallying around her statements today. Even the recently resigned Nick Boles is on board with extending Article 50.

I have been very critical of the PM and the Cabinet in an interview with @bbclaurak this afternoon. I stand by my words. But the PM’s statement is very welcome. This is the right approach. Better late than never.

By offering a cross-party olive branch to Jeremy Corbyn, this is the Conservative Party’s last-ditch attempt to avoid a no-deal Brexit.

A cliff-edge Brexit is an alarmingly real prospect. MPs still can’t agree on any of the four alternatives to May’s withdrawal deal. An extension to Article 50 has long been the preferred option for financial markets, and the British Pound loved the announcement, exploding higher against the US Dollar.

British Pound briefly turns higher as PM May says a further extension of Brexit is needed and she will seek cross-party talks to find an arrangement to present to the European Union next week. https://t.co/lEmRFByMwM pic.twitter.com/5ddnEJPZLO

Given how the two most popular options in the UK Parliament’s Brexit vote were for a customs union or a people’s referendum, May’s action to “break the logjam” does buy her government time to avoid the cliff-edge, and make those soft options a reality.

Business leaders are already re-thinking their exposure to the UK, with giant US car manufacturer Ford questioning the handling of Brexit.

The UK Prime Minister is trying to show leadership here, but in reality, she has no choice but to extend. Parliament is firmly in control of proceedings and is at a best a placeholder PM.

Still, there is a market-friendly outcome to all of this if you can ignore the looming shadow of a hard Brexit. Essentially, Labour’s previous proposal to support May’s Brexit deal if it’s put to a public vote that includes “remain” is an option to break the deadlock. The outcome of this would be a very soft Brexit or no Brexit at all. This is an intriguing prospect, particularly for the undervalued British Pound.