Jerome Powell, Trump's nominee pick who became chairman of the U.S. Federal Reserve, has thrown everything and the sink to stop the pandemic-led economic spiral - and it isn't feasible anymore. | Source: REUTERS/Carlos Barria/File Photo

Add Chamath Palihapitiya to the long list of billionaires calling for a further stock market correction.

The U.S. stock market plunged into the fastest bear market in history in March as coronavirus lockdowns took hold. But they bounced back just as fast.

Despite ‘Great Depression’ levels of unemployment and widespread business closures, the S&P 500 is only 17% off its all-time high. The Nasdaq is positive for the year.

The speed of the recovery has sent stocks back into wildly over-valued territory. Billionaire David Tepper said the market was now the most over-valued he’s seen since the dot-com bubble.

The reason for this monster bubble, Palihapitiya claims, is the Federal Reserve. Jerome Powell and his stimulus bazooka have flooded the financial markets with trillions of dollars. (And there’s plenty more where that came from).

The liquidity injection has stopped the credit markets from seizing up. But it’s also helped re-inflate equity prices. The Fed’s process of buying assets like treasury bonds, mortgage-backed securities, and even junk bonds, is known as quantitative easing (QE). But it can’t go on for ever. As Palihapitiya explains:

[There’s] just not enough USD in the world (unless you print infinite money and render it valueless) to keep buying / threaten to buy assets like this.

At a certain point, the Federal Reserve has to ease off. And what happens then?

At just 17% off its highs, the stock market isn’t pricing in the whole sale destruction of the U.S. economy. 36 million have now filed for unemployment in the last eight weeks and large portion of those jobs aren’t coming back. In a previous interview with CNBC, Palihapitiya claimed the Federal Reserve caused this gap.

We have completely divorced the economy from the stock and the bond markets, and the Fed has been the principal agent of that obfuscation. 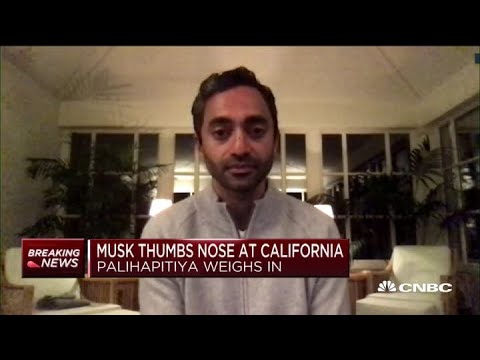 He also suggested that stimulus measures would be better deployed to the general public to encourage spending and consumption.

Palihapitiya is one of many wealthy investors sounding the alarm over stock market valuations. Hedge fund manager Stanley Druckenmiller said the risk-reward for stocks right now is the worst he’s ever seen while Tepper compared it to the 2001 tech bubble.

A recent UBS survey also revealed that a majority (61%) of high-net-worth investors were waiting for another pullback in the market before buying.

Meanwhile, amateurs and retail investors are pouring into stocks at record pace. Analysts see a shortage of new institutional money entering the market, but young investors are throwing cash at airlines and oil ETFs via apps like Robin Hood.

It’s a battle of the billionaire skeptics vs the optimistic retail investor. This could get nasty.