Will a single debate save a campaign? No, but it raises the possibility that Biden can survive New Hampshire. He must get to South Carolina at the end of the month with some momentum, no matter how small.
PHNjcmlwdCBhc3luYyBzcmM9Imh0dHBzOi8vcGFnZWFkMi5nb29nbGVzeW5kaWNhdGlvbi5jb20vcGFnZWFkL2pzL2Fkc2J5Z29vZ2xlLmpzIj48L3NjcmlwdD4KPCEtLSBUb3AgQXJ0aWNsZSBDQ04gLS0+CjxpbnMgY2xhc3M9ImFkc2J5Z29vZ2xlIgogICAgIHN0eWxlPSJkaXNwbGF5OmJsb2NrIgogICAgIGRhdGEtYWQtY2xpZW50PSJjYS1wdWItNjQ3MjA2OTY5MzY1NzE0MyIKICAgICBkYXRhLWFkLXNsb3Q9IjU4NDY0ODIyMjMiCiAgICAgZGF0YS1hZC1mb3JtYXQ9ImF1dG8iCiAgICAgZGF0YS1mdWxsLXdpZHRoLXJlc3BvbnNpdmU9InRydWUiPjwvaW5zPgo8c2NyaXB0PgogICAgIChhZHNieWdvb2dsZSA9IHdpbmRvdy5hZHNieWdvb2dsZSB8fCBbXSkucHVzaCh7fSk7Cjwvc2NyaXB0Pg==

On a night when the Iowa debacle was still hanging heavy over the Democratic party, the New Hampshire debate was an opportunity for Pete Buttigieg to test the waters as a front-runner. Despite this, it was fellow moderate Joe Biden who came out the big winner with a fiery display, including triggering a spontaneous standing ovation for the fired Lt. Col. Vindman.

Short on cash and short on time, things couldn’t have started worse for Joe Biden. Taking the first question of the night, at the center of the stage, Biden looked to his left, acknowledged Bernie Sanders was going to win, and stated he wasn’t expecting to do well. This is hardly what potential donors wanted to see on a night when they were promised fire and brimstone.

Suddenly, however, the former vice-president, realizing his political life was flashing before his eyes, managed to do what he has so far failed to in 2020. He got people excited.

The comeback began as he stated how his administration had set the stage for the future. After a fiery rebuke of Trump, he was then inspired to call for the crowd to get up and applaud the White House’s recently fired Ukraine expert Lt. Col. Vindman, who was also a key impeachment witness. Most of the crowd did stand, and it was a rare moment of Biden taking charge.

Biden also sounded credible as he talked of his experience in the Middle East, and his old-school Republican criticism about trusting George W. Bush seemed to hit home too.

Aided by moderators who kept the cameras firmly on the old VP for as long as possible, a few slight stutters and a hug for Bernie Sanders, and this was the Biden that terrifies Donald Trump and has been non-existent during this election cycle. He even got the better of the always polished Buttigieg, who seemed robotic in comparison.

National polling has continually indicated that Biden’s “purple state” appeal makes him kryptonite for President Trump. Unfortunately, he has fallen from first to fourth in the betting odds to be the democratic nominee, making this irrelevant if he can’t win.

Will a single debate save a campaign? No, it won’t, but it raises the possibility that Biden can survive New Hampshire. This was a real question heading in, and he must get to South Carolina at the end of the month with some momentum, no matter how small.

Obama’s right-hand man even managed to land a punch on the front-runner Sanders over his gun record. He brought up a loophole for gun dealers that Bernie was allegedly involved in passing.

The big loser of the night was probably Elizabeth Warren, who by no fault of her own has never looked more like Sanders’ VP. 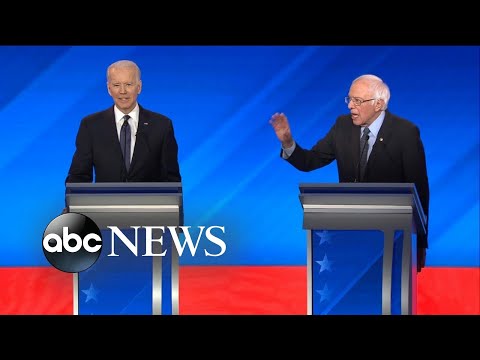 Andrew Yang has done well to stick it out this far and had some moments. But Yang sounds more and more like Bernie Sanders sprinkled with tech dust, as he insists on sticking to his $1,000 a month for all pledge.

Feb. 11 probably can’t come fast enough for Pete Buttigieg, who is desperate to keep the momentum from Iowa going. Bernie Sanders fans, enraged by the miscounts and apparent misdeeds of the DNC, will almost certainly be out in force.

Faced with these two rising tides, Joe Biden was as good as finished on Friday morning, but after the New Hampshire debate, he is alive and kicking.

Francois Aure
Financial speculator & author living in the hills in Los Angeles. J.D. but very much not a lawyer. Favorite trading books are anything written by Jack Schwager. | Follow Me On Twitter | Email Me | Article Compilation On Muck Rack
Subscribe
0 Comments
Inline Feedbacks
View all comments
← PreviousTrump’s GOP Is a Cult – But Not for the Reason Joe Walsh Thinks
Next →Donald Trump’s Impeachment Revenge Has Only Just Begun