Less than three weeks after Bernie Sanders, 78, suffered a heart attack, his presidential campaign is already back on track. The senator from Vermont not only put together his finest debate performance last week, but four days later scored perhaps the most coveted endorsement in politics, as Alexandria Ocasio-Cortez joined him in Queens for a triumphant rally that attracted over 25,000 people – the biggest crowd of the Democratic primary to date.

While Sanders’ stump speech on Saturday focused on overarching campaign themes of wealth inequality and putting power back in the hands of the people, he renewed frequent criticism of Jeff Bezos’ tech giant two days later, calling out Amazon (NASDAQ:AMZN) on Twitter for funding a Seattle City Council candidate who is running against a fellow socialist.

In a city struggling with homelessness, Amazon is dropping an outrageous amount of money to defeat progressive candidates fighting for working people.

The way Amazon conducts itself in its hometown is a perfect example of the out-of-control corporate greed we are going to end. https://t.co/E7xfmON3de

The Nation published an article last week on the Seattle City Council race, highlighting the impact of Amazon, which Bezos founded in Seattle in 1994. Incumbent Kshama Sawant, a member of the Socialist Alternative, is running for re-election against Egan Orion, a proud progressive and influential member of the LGBTQ+ community.

Orion, staking out a comparatively pro-business lane in a race between two unabashed liberals, received a late-stage boost to his candidacy recently when Amazon gave an additional $1 million to support business-friendly members of the City Council. According to The Nation, the company has funneled an “unprecedented” $1.45 million into local elections, a pointed effort to unseat Sawant that Sanders used as another opportunity to rail against “out-of-control corporate greed.” 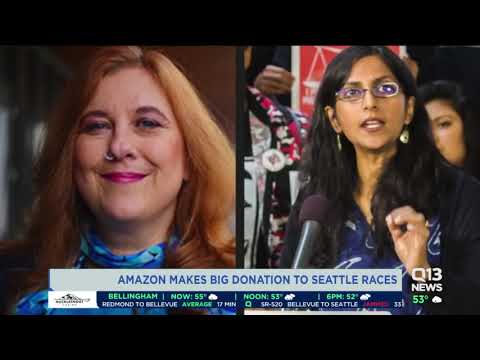 Sawant remains in favor of the so-called “head tax,” a tax on corporations grossing at least $20 million whose funds were to be used to address homelessness in Seattle. The tax passed in May with unanimous support among City Council members, but it was repealed a month later after aggressive lobbying efforts from Amazon, Starbucks, and other local businesses.

Orion is an opponent of the “head tax,” which he maintains always lacked the necessary support from voters to be passed into law. He proposes an emergency fund intended to prevent people from losing their homes during a crisis, as well as the production of 1,500 units of permanent supportive housing to curb and assist Seattle’s growing homeless population.

Amazon antagonism is on message for Sanders

It’s no surprise to see Sanders wading into Seattle’s local politics. He’s long antagonized Amazon, including after the company announced that Long Island City had won the bidding for its new campus, and he routinely rails against Bezos and other billionaires for not paying their fair share in taxes.

Warren called out Amazon for inserting itself into the Seattle City Council race over the weekend.

Surprise: Amazon is trying to tilt the Seattle City Council elections in their favor. I'm with the Seattle council members and activists who continue standing up to Amazon. Corporations aren't people, and I have a plan to get big money out of politics. https://t.co/XiVQVQfQ0P

While Warren has been more specific in calls to break up monopolies like Amazon and Facebook, Sanders is also in favor of policies that limit the influence of Big Tech. His campaign unveiled its “Corporate Accountability and Democracy” plan last week, which includes a stipulation that 45 percent of large companies’ board members be elected by employees and outright bars corporations from buying their own stock back from the marketplace.

Expect both Sanders and Warren to continue highlighting the efforts of tech companies to elect local leaders with a pro-business bent. Even in a liberal bastion like Seattle, there’s debate on the left relating to the extent of reining in corporate interests, a central theme of the Democratic primary.