By CCN.com: U.S. Senator Bernie Sanders (I-VT) is the poster child for the “Get Off My Lawn” cranky old man. He’s also a self-proclaimed Democratic socialist as well as a hypocrite and has no problem spreading lies to push his own agenda.

Case in point: Bernie Sanders, Elizabeth Warren, and eight other commie Senators sent a letter to Delta Air Lines, scolding the company for paying workers $9 an hour while the CEO pulled down $40 million in compensation and pushing for worker unionization.

Delta Airlines is worth billions and paid its CEO $22 million in 2017.

It’s fighting its employees who want to join a union and negotiate for better wages, telling them to buy video games instead.

That is the kind of greed we are going to end. pic.twitter.com/0EBS1Xxa9M

Parsing a portion of the letter reveals lies and hypocrisy from the far-left politicians:

“Mr. Bastian, you earned almost $40 million in the last two years while paying workers who make Delta Air Lines arguably the most financially successful airline on the planet as little as $9 per hour. Thousands of your employees live paycheck to paycheck and seek IAM representation to better their lives….[allow] Delta workers to decide whether unionizing is right for them.”

“Across the board, [Delta employees] are the best-rewarded airline employees in the world.”

Bastian insisted that Delta employees do not make $9 per hour. Starting salaries are closer to $20 per hour. Plus, after a dozen years with the airline, agents and attendants make $74,000 per year while mechanics are rewarded at $121,000.

Bastian didn’t stop there, noting pay increases have averaged 8% over the past 10 years and employees receive a profit-sharing bonus derived from 15% of annual profits.

This is typical of Bernie Sanders, Elizabeth Warren, and the leftists: they just lie to win points with their socialist constituents while thinking that demonizing a major corporate employer is somehow a good plan to win over independent voters.

Yet there’s deeper hypocrisy going on if one understands the history of unions. Bernie Sanders, Elizabeth Warren, and the Democrats yammer on about allowing workers the choice to unionize, yet for decades they’ve fought right-to-work laws in every state. 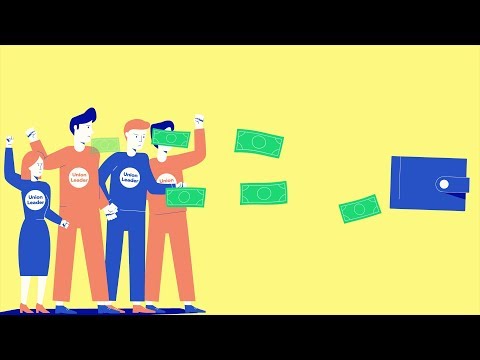 Right-to-work laws are laws that, ironically, allow workers to decide whether or not they want to join a union rather than be forced to join a union.

The letter to Delta contains additional nonsense, including:

“Let’s be clear. Your attempts to deny the right of Delta workers to form a union is corporate greed, plain and simple. If Delta works gain union representation, they will finally have…a living wage, decent benefits and safe working conditions.”

Bastian already addressed the wage and benefits issue, but where does Bernie Sanders come up with this nonsense about “safe working conditions?”

The FAA already mandates extraordinary safety procedures throughout the airline and airline manufacturing industries, and companies impose additional safety protocols because they don’t want to get sued if someone gets hurt.

Nor is there “corporate greed.” Bernie Sanders and his trolls forget that a company has a sacred fiduciary duty to maximize shareholder returns.

None of this even mentions the highly cyclical nature of the airline business, where companies can have solid profits one year and destructive losses the next year.

Let’s not forget that Bernie Sanders is himself a millionaire with three homes. Where he gets off criticizing Delta is a mystery only solved by one’s understanding of the nature the politics.