By CCN.com: Stumbling across a headline like “Ben Shapiro self-destructs on camera” is not a rare sight on the internet. As perhaps the most conservative millennial conservative commentators, his aggressive debate style often incites rage in his political opponents. For once, though, Shapiro not only self-destructed in spectacular fashion – but to his credit – he actually admitted it.

Shapiro appeared on the BBC to promote his new book. Andrew Neil, a prominent UK conservative and an editor at the “The Spectator” – a right-wing publication – tried to interview him. A visibly-unhinged Shapiro incoherently railed at the “left”-wing Neil and stormed out of the interview in a fit of rage. 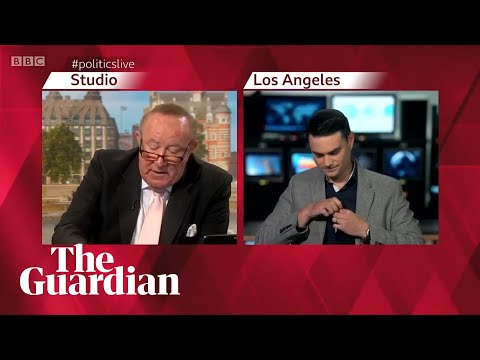 It’s hard not to smile at the “if you only knew how ridiculous that statement is” reply by Andrew Neil. He’s dealt with far more troublesome guests in the past.

Ben Shapiro’s defensive attitude betrays that he was trying to look tough in what he mistakenly expected to be a liberal hornet nest.

That he was actually speaking to one of the world’s most respected conservative journalists and didn’t know was beyond shocking. Thus Andrew Neil got to deliver a delicious mic drop as Shapiro imploded and headed for the hills.

Ben Shapiro storming off in a huff after being humiliated in an interview by Andrew Neil. You’re not on Fox News now.

The full interview is well worth a watch pic.twitter.com/M78kxigxou

Mr. Neil isn’t wrong. US politics have become so polarizing that the dialogue has stopped. Both sides have dug trenches and merely hurl verbal abuse at one other.

It was fascinating to see how poorly Ben Shapiro fared when presented with a different political climate. He was undoubtedly a better host of PewDiePie’s meme review than a guest on BBC.

For someone whose reputation relies on self-confidence and the ability to win debates, it’s clear this was a PR disaster. GOP fanboys who worship him as a conservative Achilles will be disappointed to see Neil’s subtle arrows find his heel.

Andrew Neil gave Shapiro a prime opportunity to introduce himself to a right-leaning UK audience. Instead, the notoriously fickle British Conservatives saw only a petulant child.

Still, even this petulant child had the wisdom to own up to his folly, stunning many critics by tweeting out the following response.

.@afneil DESTROYS Ben Shapiro! So that's what that feels like ;)
Broke my own rule, and wasn't properly prepared. I've addressed every single issue he raised before; see below. Still, it's Neil 1, Shapiro 0. https://t.co/UAtAUtIWtO