The Chicago Bears had nothing to play for on Sunday. They were eliminated from playoff contention last week with a loss to the Green Bay Packers, officially ending preseason dreams of a Super Bowl berth that have been slowly fading away for months.

But there was a subplot to yesterday’s game against the Kansas City Chiefs that added some much-needed intrigue to Sunday Night Football: Mitch Trubisky and Patrick Mahomes going head to head.

Throughout the broadcast, NBC hyped the matchup between the third-year signal-callers as yet another in football’s ongoing changing of the guard at quarterback.

Bears fans knew better than to fall victim to that charade, though. Trubisky has been one of the most disappointing players in the NFL this season, while Mahomes has fought through injury to follow up his MVP debut with another dominant campaign.

Still, it’s too early for Chicago to give up on its franchise quarterback. If Trubisky could match Mahomes’ magic under the bright lights of national television, hopes of him leading the Bears to annual contention going forward wouldn’t prove so far-fetched.

It didn’t happen. One extra self-loathing Chicago fan, though, made sure he left Soldier Field happy despite Trubisky and Mahomes living up to their well-earned reputations.

The Bears, of course, selected Trubisky with the No. 2 overall pick of the 2017 draft. The North Carolina product was broadly considered the top quarterback in his class. Even so, there was ample debate about how to rank Trubisky, DeShaun Watson, and Mahomes leading up to draft night.

Chicago went the “safe” route, paving the way for the Chiefs to trade up from the late first round to draft Mahomes – who they’d targeted all along – at No. 10. Watson, a two-time Pro Bowler for the Houston Texans, was off the board two picks later. 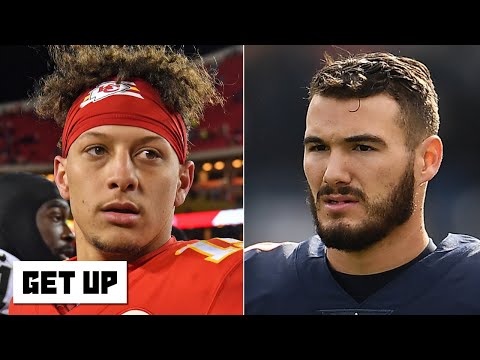 It’s not entirely fair to criticize the Bears for picking the wrong franchise quarterback. Many analysts even ridiculed Kansas City for mortgaging its future to nab Mahomes. There was no clear-cut quarterback pecking order.

Well, except for maybe from the Bears fan who wore a custom-made Mahomes jersey on Sunday night. Did he commission the jersey during the draft in hopes of Chicago drafting the Texas Tech gunslinger? Or after Mahomes had established himself as a superstar, in a trenchant dig at Trubisky and the Bears’ front office?

Either way, with the help of Trubisky and Mahomes, the Bears’ most disgusted fan certainly got his point across on Sunday.

The Chiefs beat the Bears 26-3. Mahomes went 23-of-33 for 251 yards and three total touchdowns, while Trubisky completed barely half of his 34 throws for 157 yards.

Mahomes tricked the entire Bears defense and ran it in himself 💨

The outcome of Sunday’s game was somewhat surprising. The Chiefs were favored for a reason, but few expected them to make the Bears look like a bottom-dweller. But what came as no surprise whatsoever was the contrasting play of Mahomes and Trubisky.

As Chicago fans go into hibernation for another long offseason, it’s doubtful that any will take solace from knowing what could have been. But at least one of them is confronting that depressing possibility head-on, refusing to let himself forget a decision that will haunt the Bears for years.

For his sake, let’s hope that this unique form of therapy pays off.