There’s nothing Apple loves more than ripping off your rich friends. For the price of a standard Mac computer, you can easily purchase two PCs that are technically comparable but lack that iconic logo. And don’t even get me started on the Mac Pro.

But the price-gouging doesn’t end with their hardware. Even their ancillary peripherals carry price-tags that look more like the average person’s rent payment.

The latest addition to Apple’s cavalcade of expensive accessories is a next-level scam.

The Apple Mac Pro Wheels Kit is exactly what it sounds: a set of four wheels for the bottom of your Mac Pro. The price tag? $699. That’s an insane cost for what basically looks like a handful of casters from an upscale desk chair.

Why do people shell out for Apple products again?

This Takes the ‘Apple Tax’ to a Whole New Level

There is a reason why most of Apple’s core products are so expensive. They’ve been made very well over a number of years, which has translated into a positive brand reputation.

That is why they’re able to make deep-pocketed consumers pay the so-called “Apple Tax.” Since they have a valuable brand and plenty of adoring fans, they can charge through the nose for their products.

But even if you’re willing to argue that Apple’s hardware products are worth the inflated prices they charge, there’s no defense for a set of four caster wheels that cost $699.

It’s literally just stainless steel and rubber. There’s not even anything extra included in the box, just a hex bit, some instructions, and the wheels. No amount of “custom design” can excuse such a grotesquely high price. Even as someone who has owned some Apple products, it’s hard to wrap my head around.

And this doesn’t even begin to account for the fact that if you buy these wheels at the same time as a Mac Pro, they only cost $400. So to buy them separately, there’s a $299 surcharge for… reasons.

At this point, if you don’t feel like Apple is no longer even trying to conceal their glee at ripping you off, then you’re just not paying attention. 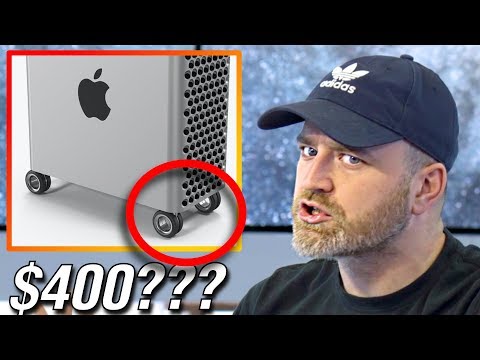