After years of speculation and anticipation, Apple is expected to reveal its Apple TV streaming service at a star-studded event in Cupertino, CA. Apple’s service is its response to the overwhelming success of the Netflix (NFLX) platform. Like Netflix, Apple is spending big money on original content to entice subscribers. Tim Cook and company are reportedly committing $4.2 billion on original TV and movie content through 2022.

Apple is set to have a showcase event where it is expected to reveal details about the company’s billion-dollar-plus bet on entertainment, which will put Apple in direct competition with Netflix, Amazon and HBO https://t.co/cxtOcnWvdD

According to the Wall Street Journal, Apple plans to keep its content family-friendly and PG-rated.

The company has been true to its reputation for secrecy. Investors don’t know much about plans for pricing, structure or even an exact launch date. However, analysts speculate Apple will likely attempt to undercut Netflix on pricing, at least initially. Netflix’s standard monthly plan costs $12.99. 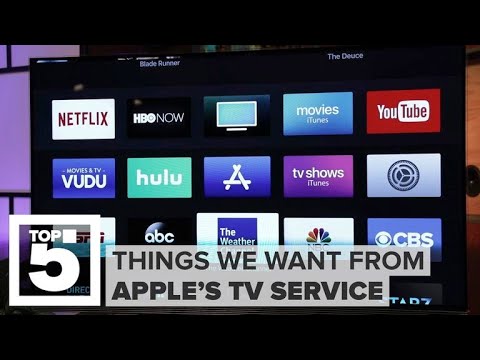 Apple joins Walt Disney (DIS), Hulu, AT&T (T) and other competitors trying to get their foot in the door in a streaming video world dominated by Netflix.

Investors can expect Apple to continue to aggressively add streaming content partners, according to Ives. He says Apple TV will be a centerpiece of the company’s Services segment revenue growth in the long-term. With iPhone unit sales growth stagnating, a major part of the bull thesis for AAPL stock hinges on Services. Total iPhone units sold in 2018 dropped 2.7 percent. Apple reported 19 percent Services revenue growth in the most recent quarter.

“The services business remains the wild card in driving the valuation higher for Apple as we estimate the valuation of the services franchise for the company is worth roughly $400 billion on a standalone basis with this highly profitable segment poised to exceed $50 billion in revenues by FY20,” Ives says.

He estimates Apple will spend roughly $1 billion on production deals and original content this year. Ives also says the company may reach outside of its comfort zone and make at least one large acquisition this year to jump-start its platform. He lists A24, Lionsgate and Sony Pictures among the most likely potential buyout targets. At the end of 2018, Apple reported cash on hand of $245 billion, more than any other public company by a wide margin.

Despite the heavy costs associated with building and growing the service, Ives predicts it will be a big hit for  investors in the long-term.

“If Apple executes with minimal speed bumps and aggressively acquires content, given the company’s massive installed base and unmatched brand loyalty, we believe reaching 100 million subs in the medium term (3 to 5 years) is a realistic goal that could translate into a $7 billion to $10 billion annual revenue stream over time for Apple and further cement its installed base and halo effect,” he says.

Ives values the streaming service at about $15 per share and has raised his price target for buy-rated AAPL stock accordingly.

Just watch $AAPL–upgrades and target bumps.. That's what the morning is all about.

Apple Still All About The iPhone

While a higher price target is certainly good news, other analysts are warning Apple investors to keep expectations in check. Last week, Raymond James analyst Chris Caso said the streaming service will initially add only about 12 cents per share in incremental annual earnings. In the most recent quarter, Apple reported earnings per share of $4.18.

“While we don’t yet know the full details of the offerings, we think we know enough to be able to make modeling assumptions, and even during the event Apple won’t typically provide many financial details aside from pricing,” Caso wrote.

Caso also pointed out that Apple’s iPhone business is so large that even a successful streaming service will have minimal impact on overall earnings. He said Apple would need a service “several times” the size of Netflix’s platform to meaningfully impact earnings.

Fortunately for companies trying to catch Netflix, the global streaming video market is massive. There may be plenty of room for multiple long-term success stories. Raymond James has a “market perform” rating for AAPL stock.