By CCN.com: Apple stock plunged more than 5 percent on Monday after the Supreme Court ruled 5-4 against the consumer electronics giant in a case revolving around its App Store. The decision will open the doors to an antitrust suit against the company, brought by iPhone users.

Supreme Court Findings a Blow to The Embattled Company

Consumers of Apple’s iPhone are now able to pursue an antitrust lawsuit against the company. The lawsuit claims that Apple’s 30 percent commission on sales made through the App Store is an abuse of monopoly power.

The Supreme Court was unconvinced of Apple’s argument that the lawsuit could not be pursued by iPhone users but by app developers. Users of the company’s iPhone claim Apple’s abuse of market power has resulted in inflated prices that are passed onto consumers.

In an opinion written by Justice Brett Kavanaugh, the Supreme Court said:

“Apple’s line-drawing does not make a lot of sense, other than as a way to gerrymander Apple out of this and similar lawsuits… Apple’s theory would provide a roadmap for monopolistic retailers to structure transactions with manufacturers or suppliers so as to evade antitrust claims by consumers and thereby thwart effective antitrust enforcement.”

#SCOTUS allows lawsuit by iPhone users against Apple to go forward; iPhone users allege that Apple is violating federal antitrust laws by requiring them to buy apps only from company’s App Store

The Supreme Court’s decision was widely expected after November arguments in the case suggested the court was skeptical of Apple’s argument that the 1977 Illinois Brick doctrine should be applied. Apple argued that consumers could only sue the party which sets a retail price, and not the company that provided the platform on which the product was purchased.

Though he dissented in the ruling today, even George W. Bush appointee Associate Justice Samuel Alito questioned the relevance of Illinois Brick in a market where consumers purchase electronic products through a large platform provider:

“I really wonder whether, in light of what has happened since then, the court’s evaluation stands up.”

Apple Stock Suffers Another Setback After Worst Week of 2019

Apple’s widely ridiculed launch of a credit card in March marked the beginning of a horrendous period for the company. With flatlining sales in its second largest market, China, the company’s announcement of a credit card in a product launch presentation by CEO Tim Cook hinted at signs the giant was struggling to innovate in a saturated marketplace.

Only a day later, ITC Judge Mary Joan McNamara revealed plans to endorse a ban on some Chinese-made iPhone imports, after finding the company infringed on Qualcomm patents. Stocks fell heavily in the immediate aftermath, though the two sides eventually reached common ground. 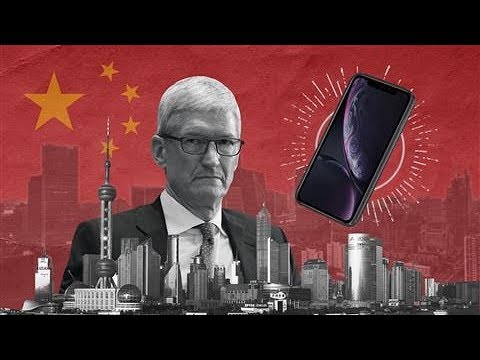 Apple has since been identified as a potential loser in any US-China trade tensions. Last week was Apple’s worst for the year, with shares sliding 6.9 percent as concerns over a trade war mounted.